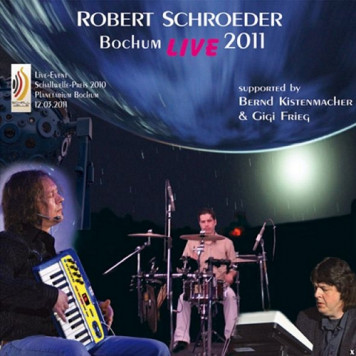 On the occasion of the annually Schallwelle Award ceremony, Robert Schroeder once again gave a concert on the 12'th of March 2011 in the Planetarium Bochum (FRG). Accompanied by drummer Gigi Frieg and in the encore supplemental by surprise guest musician Bernd Kistenmacher for the approx. 250 spectators results a spectacular and impressing event. Correctly, and therefore the concert is pressed also on CD and released April, the 20th 2011. So also those, which unfortunately could not be live thereby, have the possibility to experience the unusual concert at least in music.
By the way, here was played really live! And the audience that could see and follow very closely, because Robert Schroeder has developed a new keyboard, which looks and is similar played like an accordion. Thus the public could see in the true sense of the word on the fingers of the artist. Also the new keyboard is made with an exceptional design and attentive light effects. It was a real eye-catcher for the audience. This was worldwide the first concert and the first public presentation of this new equipment, whose name may not be called here for patent reasons unfortunately yet, since Schroeder would ones like to bring this instrument up to ready for the market. Speculation, so currently, interpret a wrong conclusion that this instrument is to be called "DOS Control". This is only a temporary name of the prototype.