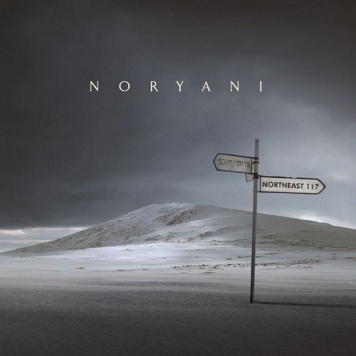 A little gift from Poland,

doesn't really consider himself as an artist but rather as a music creator. We must listen to it before agreeing to such a statement! Because the Polish synthesist, or sound sculptor, has a superb talent to create a melodious music which dives into rhythmic storms as dynamic as varied and unexpected. Northeast 117 is his first album. A nice one carefully thought through which presents 9 tracks all so melodious one from the others which soak into cadences and sequences in continual permutations. Suave, synths are vaporous with nice orchestrations which are not without reminding the silky angelic world of Vangelis more exactly in the periods of Direct to Voices, while passing by Blade Runner.
A fine sequential carousel with sonority of a limpid circular harp opens the first measures of Destinations-Northeast. A synth puts down light pads of mist whereas the carousel waves with more insistence. Some percussions to hybrid tones frame the pace which beats beneath arrhythmic pulsations, wrapped by suave synth solos with a scent of saxophone. The rhythm slightly more accentuated and a more fed structure, Destinations-Northeast evolves towards a sequential whirlwind where notes of a quixotic harp sway on a pounding rhythm and synths to symphonic breezes. After a noisy metallic click Monumentos (El Primer Círculo) offers a soft movement of melodious synth which multiplies its harmonious layers such as a

soundtrack. The movement is smooth and bended on a fine sequence which softly waves, dragging Monumentos (El Primer Círculo) towards a very nice synth lament. It's a very nice track where the hair skin raises quite as the spine so much the resemblance with

soils with a heavy and atonal track which spins of its heavy metallic synth stratums. If the first phase mixes choirs synths layers to reverberating curves, the second phase livens up of a fine line of percussion which skips nervously, but subtly, beneath a symphonic synth duped of heavy rippling stratums. The tempo becomes more precise at the end of the road with keyboards and piano keys which dance on a more lively structure where hoarse metallic breezes are fitting on a slightly syncopated sequence.
Canela is another beautiful track that shows all the sound work created by

on Northeast 117. A track which shows several unexpected developments and which subjugates by the beauty of its approach a bit jazzy. Movements of rail trains unfasten the intro. They stop there, where a sulphurous synth to saxophone solos glean on a rhythm which settles down. Sensual, Canela opens a hybrid sequential movement where sequenced chords pulse and are subdivided into balanced chords and others which take the shape of industrial jingles that we heard almost everywhere on Northeast 117. Subtly the tempo deviates towards a tribal approach. But it's a short detour before it takes back its cruising speed with a surprising hybrid sequential movement which charms beneath the breezes of a wandering saxophone. Caramelo moves on with a short ambient intro fed by a multitude of eclectic tones. Percussions fall and mould a jerky rhythm that a good line of bass embellishes with its hopping notes. Synths are always as vaporous as harmonious and sing on a rhythmic structure struck by good percussions with anvil sounds and encircled by a light syncopated movement. New from far Away is a strange ballad. Strange because beautiful with its tearful synth which draws an approach of a solitary cowboy and by those percussions which tumble to mould an indefinite rhythm that winces more than it moves. It's a nice track that, like most of the tracks on Northeast 117, suffers of a kind of musical bipolarity because it always eventually bursts of a still rhythm on a soft fluty synth. Solid State (Interpolar) is a blend of techno and very energetic free-jazz with its pulsating percussions and its warmth synth lines. It's a real knocker! Re-Set encloses this first opus of

with a superb melodious approach hunted and torpedoed by a solid syncopated rhythm. Delicate notes of an acoustic guitar are pinched with firmness and plot a soft melancholy which drags its sadness on a mellotron cloud. Threatening reverberations break this ethereal melodious combination, opening the door to percussions which strike shyly the pace on a finely jerky sequential line. Quietly Re-Set dresses itself with a range of composite tones, before biting the rhythm on a jerked sequence which explodes in a fiery movement of a very schizophonic techno. It is the proof by nine that Northeast 117 is feeding on unpredictable rhythms and musical styles more than varied on structures initially very melodious. Here is a nice album of a beautiful musicality that one listens to as we breathe the freshness of the wind and where

is as well enigmatic as very promising.

We take a sequential trip as soon as the first piece begins. As far as famous synthesizer artists are concerned, there come

to one's mind - here it is, a lonely snowy park, somewhere far away car- and neon-lights are shimmering, and this very place lives a life of its own, caught with a hidden synthesizer-oriented camera... The second piece is quite rapturous, optimistic; such mid-tempo pace and "sunrainy" melodies are normally associated with musicians collaborating with the Neu Harmony label.
The shape of the third piece is marked by silence and pauses as well as by lurking sequential passages and some catchy tunes a'la

(let's pay attention to the arrangements - doesn't it all sound a bit as if it was Blade Runner's twin?... The fourth track is based on penetrative dark beams, whereby a kettle full of black ambient mass is boiling. This would be an ingenious intro, and behold, it turns out to be a whole piece of music! Apart from that, there appear some nice bassline sighs in the background - until now it's my favourite piece of the set.
Track five... Long shadowy sounds flow through space a bit as if it was some early

record, and the main melody is here the jewel in the crown - a gramophone recollection, a leaf found near the puddle in the park whose specific form reminds us of something nice, warm and long forgotten. Such is the atmosphere of this piece of music, yet another one among my favourites. The sweepy percussion line could also be a work by

, another master of nostalgia with a bit of humor to it. The sixth piece illustrates the question "What is time?" quite well. There they go, sombre and melancholic chords, accompanied by some murky background-sounds and an elegant trance percussion line. This one is a very nice melange of elpop and chilly electro in a navyblue-silvery organic mood. Track seven brings some windy keyboards, while an electronic sandstorm is approaching. An interesting way to serve electronic romanticism and a good deal of suspense. In the eighth composition a catchy sequential "riff" appears, reminding me of the atmosphere of non-hit tracks from Peter Gabriel's So. Here we have nice "singing" drum patterns and a pleasant recurring melody. The sequencer joins in and, after two minutes from the start, a trance beat-line. Now there is pretty much going on at all levels, static keyboard soundscapes get mixed nicely with percussive dynamics. At dawn we take a look through the window and see all the buildings and cars as if in a deformed negative photo - as if it were the same as usual, and still, what an enthralling surprise! Track nine is the final word. Soft guitar sounds as if from some other dimension, wax dawn mantra; through the window we catch a glimpse of the snowy park from the opening track. The street lamps fade out, night turns into bent cold dawn, we cannot be sure if it is a black garbage bag or a raven preparing to fly away, there, behind the bench, in this gloomy aura... Such a beautiful piece of music to wake up with, an introduction to yet another snowy, frosty day. A track I could compare this one with is Thomas P. Heckmann's fantastic Astral Chains. Strongly recommended.

Tangerine Dream
The Angel From the West Window
83,17 PLN