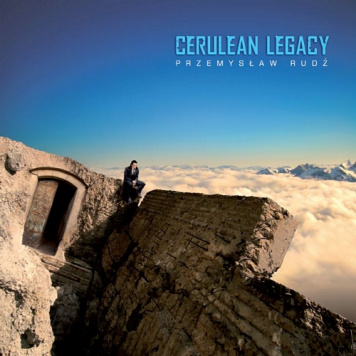 is one of the finest new artists to emerge from the EM scene since a couple of years. Strongly inspired by sci-fi and the music of

, the Polish synthesist builds albums in the measure of his visions with a skilful mixture of rhythms, sound effects, samplings and atmospheres. Cased in nice artworks that depicts the ideals and minks without ambiguities,

' works soak into pure energetic cosmic rock. Cerulean Legacy is the cry of an artist so that our descendants have the right to aspire to a better world, a world of azure where it would be good to live in it, as the one our ancestors built. Farewell to Tranquil Existence opens this 4th

work with a long and sinuous synth wave. Soon, other waves are adding. Graver and more resounding they float and get entangled become with variable tones in a long musical cortex where they waltz and float casually in search of a sequence, a rhythm. Little after the 7th minute a discreet guitar riff appears. This riff rubs an abstracted rhythm behind a maelstrom of synth layers agglutinating in a cosmos filled of very Jarrian tones. This riff tumbles in loops, being astride a persistent plasticized electronic where joyful and shrill human voices are out of tune among twisted and sharp synth solos which try to tear this opaque veil that is the sound barrier of Farewell to Tranquil Existence. With its rhythms and sudden outcomes Mystery of ALH 84001 is the craziest track of Cerulean Legacy. It starts with a very eclectic intro where fine tinkled arpeggios wind and glean among very heterogeneous tones, not to say very extra - terrestrials vocalizes. A fine hatched sequence emerges out of this glass magma to dance of a hesitating movement. It circulates in limpid circles and scatters the glasses ringing whereas a warm synth veil wraps up Mystery of ALH 84001. A thick fog settles down, imprisoning Cerulean Legacy's longest track into an inertia where circulates and embraces a thick cloud of morphic stratums. Another sequence appears. This time it cackles such as a galactic duck while a drum shakes it skins with hardihood to shaped a rebel and chaotic rhythmic which draws the bedazzled rhythm of Mystery of ALH 84001. Solos and synth layers bite this wild rhythm, as a cosmic free-jazz, while percussions are isolating to hammer an unexpected solo. The beatings fall with a robotics precision while a low sequence with resonant chords encircles this solo to mould a syncopated tempo which hiccups beneath nice synth pads and cherubs' shouts lost in a notion of the time that only

seems to overpower. A little as Farewell to Tranquil Existence, Of Gaia Prophetic Dream floats in a cosmos filled by caustic and slinky synth stratums. Notes of guitar are dawdling there. Wandering and solitary, they chatter with the chirping of quixotic birds which sing in the shade of a synth from which sclerosed layers and metallic stratums roar under droning pulsations.
Two Days After Extinction begins with a beautiful cosmic choir which extends beyond the first notes of a lonely piano. A beautiful and soft intro where we feel all the gloom and the melancholy of 2 days which follow some disaster. The piano there is superb. Notes are strummed with the sadness of a pianist forgotten in a night-bar where some metallic clamours can be heard. We navigate between several parallel musical worlds. I'm hearing there some influences of

on a slow movement which smells distress, a little as in the universe of Blade Runner. And this illusion takes all its sense with languishing synth solos that tear the opaqueness of sadness beneath fine mellotron mists. At around the 5th minute spot, a heavy sequential movement shakes the apathy of funeral laments, there where voices continued to murmur their sadness in the shade metallic crows croaks. It's a short sequential movement which serves as rhythmic link between Two Days After Extinction and the lively The Power of Mind. The bewildered rhythm of a jerky and stroboscopic sequential movement gets moulding to those psychotronic beatings of Mystery of ALH 84001and to a hiccupping bass line in order to forged a wrecking rhythm where the heavy techno'd approach marine very well with a crazy free-jazz. The Power of Mind is wild and fed by the beatings of a curt and incisive drum whereas synths wave and stroll without too much instigation on an unbridled rhythm. A rhythm which quietly goes astray towards a more cosmic tangent beneath the story of a fragment of speech held by Stephen Hawking in Mars 2002. Still there, we feel the strong influence of a

with synth layers there which are waving and embracing with sonorities from En Attendant Cousteau.
Surprising, mesmerizing and puzzling are the first qualifiers that come in mind to describe this last musical odyssey of

. Cerulean Legacy is an opus just like its title. A powerful album where the blue-sky tears two universes of which the parallelism is next to a kind of improbability and where the soft ambient and morphic music caresses wild and ambiguous rhythms. Navigating between the complexities of a musical world to sinuous atmospheres and rich in composite tones as well as in rhythms at once explosive and reserved, Cerulean Legacy is this kind of story to be listened to with all the attention which deserves its conception.
Sylvain Lupari - gutsofdarkness.com & synth&sequences.com

5 tracks, almost 69 minutes. The whole adventure starts off on a vast airport on a beautiful sunny day. What we are hearing is one column of a chord - and still there is so much happening around: some thoughts take off, some other are landing... Everything is subtly muted with a flanger-deck, sunshine is every now and then blended with clouds - memories intermingle with reality, and then a giant airplane arrives and moves through the heathaze. Around 7:00 there appears a punctuated sequence, somewhere in the background there is still plenty of moving thoughts and memories. In the ninth minute some voice and laughter samples are added into the mix and the lead synth sounds a bit like on

records from the early seventies. With the 12. minute the music fades out. The second track is a suite of over 20 minutes. Some mystical silent sounds are to be heard: bells, subtle rattling, followed by a whole bunch of electronic flashings and tiny flickering lights. The patterns become more complex, the whole piece of music has new boundaries and new shapes. Around 3:00 new chords are introduced, floating about in the rattling musical stream. Very good meditation music indeed; stagnative yet ceaselessly changing. After the first five minutes the proportions have changed, the chords are now louder than the colourful pattern stream. Before we arrive at 7:00 the "stream" becomes silent and gigantic chord cloudscapes are left alone on stage. A leading melody is formed, quite in the Oxygene mood, especially when the chords get itched with icy needles coming from behind the clouds. Later there appears a percussion line, the ostinato melody changes, and in the 17. minute of the track we can witness the birth of a human child a cyborg? a fairy? yet another creature?
Track three brings static chords, once again under a flanger-deck, and some aerodynamic floatations. The wall of sound is every now and then loaded with a sitar-like hiss - East meets West. The atmosphere is conjured up with quite few sound levels, once again we have to admit that

has really brilliant ideas how to create fascinating sounds. Thanks to the overall guitar softness and slightly oriental taste this piece of music reminds me of Popol Vuh's Aguirre, nonetheless served in a very special, individual way. The sound spins in a psychedelic circle, we are quite near to spacey moods a'la Move D vs.

... It's a pity that after seven minutes the music is suddenly gone.
Track four is opened with static humming of an electronic choir, once again one has to think about Popol Vuh and their Aguirre - there's plenty of room, the fresh scent of vast meadows is really tempting. At about 5:00 gentle piano sounds can be heard, with a crystal touch a'la

The Story of the Clouds to it. On the other hand, one might associate the mood of this track with the most melodic passages of

Esoteric Goody. A thoughtful solo gets onto the gigantic choral tree. In the 14. minute crows soar above our heads - could it be a reminiscence of Pink Floyd's Echoes?... The crystal-clear song of the piano sounds fantastic with the apeironic vibrating meadow choir as a background - well, without any doubt it is my favourite piece in the whole set. And there is still more to it  as soon as we think, that the time is up and the track comes to an end, some nice bass thuds are added and as if from a long forgotten cave there appear waves of sequential smoke. Unfortunately, as we are waiting for yet another movement, yet another change, the music suddenly is gone, the track fades out into the last piece of the album. This one is rather lively, thanks to a percussion line and a rhythmically trembling melody - a nice crossover try between traditional electronica, elpop and electro. Quite in

confronts us with his own vision in a similar style. Nice sighing chords wander around, and on top of that a lecture on Stephen Hawking's physics is to be heard. Oxygene-like cloudscapes recur... We cannot believe that we are still in the same world, in which we pushed the "play"-button, and not in a parallel universe created by the artist. Congratulations,

, it's your best album so far!