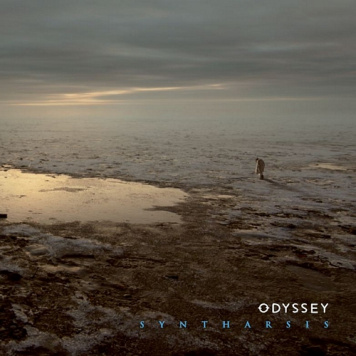 It's with the very ambient and cosmic The Space Inside, which we find on Awakenings 2007 Vol.I, that

resuscitated of its ambient and astral waves. Initially released in 2001 by the contemporary artist and Poland EM producer

, Syntharsis knew a brief succ's d'estime' on Polish, Norwegian and Dutch radios waves while spawning around in the circles of underground and experimental music, as well as in France and England. Reedited by the Polish label Generator.pl. in a double CD format, Syntharsis is reborn of its tones with a new mastering, besides offering unreleased material write at the same period and some remixes of tracks that hook the attention of fans when initially released. A double album to the antipodes of an ambient and vitamined music in down tempo structures,

is a soft strangely mesmerizing reflection of a world divided between its elements.
An aquatic world with sonorities of a metallic fusion universe opens the first waves of Inner Intrusion. A track to hybrid atmospheres where the cosmos drags the wanderings of an earth of desolation, Inner Intrusion roams such an astral ghost on a synth line with fine loops which are interlacing in the echo of the waves on a linear movement. An atonal movement draped by a thick cloud of sound effects which float in a cerebral oblivion, Inner Intrusion is a curious sonorous fusion of which the entanglement of sound waves shapes a fascinating morphic melody. A threadlike metallic line tears The Space Inside's introductory veil which lets filter a sound prism stuffed with cosmic heterogeneous tones. Synth layers are morphic and waltz with a big emotionalism in an oniric cosmos a'la

, drawing superb exhilarating curves which are entangling with a strange astral sensualism. A great floating track, The Space Inside is unarguably the cornerstone of Syntharsis and spreads his recollections and floating roots beyond its boundaries to wrap the languishing and cosmic Reincarnation and of whom every blow of scattered percussion molds a rhythm which dawdles in odd loopy pulsations. These latent rhythms which look for themselves in the hatching of a semi ambient music teem on Syntharsis, as proves the syncretic and enigmatic Re:Synthesis and Re:Versed Worlds, which is filled with

aromas, the sparkling Re:Phlexess and the poetic S.T.A.R.S.
Oscillating between the ambient and the down tempo, the rhythm is not totally absent in Syntharsis. After a very ambient intro, Neurogenesis is lighting up on a beautiful bass line which hems on fine percussions that sound like hypnotic pulsations. The tempo espouses a kind of groovy lounge which dances on a delicate syncopated line. With a shy and delicate rhythm, Neurogenesis adheres to Plastikman's kind of electro acoustics cadences before melting in a more New Wave structure with its quixotic violins which surround a delicate techno'd'beat. Time and Deep is cemented in ambient but tortured by percussions without rhythms or cadences. A heavy ambient track sculptured in the depth of cosmic winds and embellished by a beautiful synth which blows a perpetual astral melody. Sunlight offers a rhythmic structure clearly more sharp edgy with its arpeggios which swirl violently in the breezes of its intro. Percussions heavy of resonances, pound a circular rhythm flied over by keyboard keys which swirl restlessly, guiding Sunlight towards a more melodious phase. A nice melody sung by a soft keyboard of which chords are constantly wrapped by arpeggios circulating with anarchy on an ambivalent structure where the beauty of harmonies is caught by acrimonious electronic tones before diving into the interstellar abyss which wraps this very first opus of

.
Contrary to CD 1, where the rhythms were scattered among ambient structures, the CD 2 of Syntharsis proposes a subtle and nice progress in rhythms. After the very atmospheric and cosmic Beyond S.T.A.R.S., Constellations of Mind is propelled by heavy ambient winds, like strata waltzing in cosmos. The synth sonorities are as much suave as shrill, while brief rhythmic attempts try to emerge from this heavy ambient membrane, quite as in Traces of Reality - Terra Eois. We feel there

influences are very omnipresent on this 2nd portion of Syntharsis, as on Traces of Reality - Snapshots where sounds of camera clicking for snapshots abound on a of Moon techno tempo style. After an atmospheric intro the hiccupping rhythm of Structures is setting up. The rhythm is curt and embraces a structure oscillating between techno and down tempo with good percussions which hammers and machine-guns a slightly syncopated pace. More cleared and arched on quite ingenious electronic percussions, The Logical Structures offers a suave down tempo with very Jarrian influences while Innercity is sharply more frenzied and chaotic with its nervous and jerky rhythm, coated by strata of a copper synth. The 2nd portion is very lively and infectious with solid percussions which explode on a pace broken by violent rhythmic jolts. By far the most furious track on Syntharsis, Innercity is a powerful track ideal for hot dance floors. Neurogenesis Radio 2008 Edit and Extended Mix are rather faithful to the original, while Flat Three Remix proposes a more resonant and fluid rhythm on slamming percussions. The bass line spits heavy notes and percussions hammer a hypnotic tempo whereas synths are harmonious and throw a catchy mellotron veil, giving to this Flat Three Remix a techno air with 80's New Wave hint, while Aphex Glitch Mix is more intriguing but less lively on the rhythmic level. Time and Deep (X-Tended Version) is an identical version, but longer than he one proposed on CD 1. I have nothing against, because it's a beautiful track which is bloody more attractive with the Lo-Fi Air Remix because less metallic.
The music of

is astonishly rich. It's evident that

Syntharsis is sculptured in musical atmospheres, sometimes ambient and sometimes cadenced, where down tempo and ambient music is covered with beautiful sound effects as electronic as eclectic. It's a nice double album of which the variance of styles can please as much fans of soft techno, down tempo and floating music.

, who previously published the track The Space Inside on the Awakenings 2007 vol. 1 compilation.
The Generator.pl version of Syntharsis is actually a special re-edition of

debut album (which appeared in 2001), as it features previously unreleased session outtakes and a bundle of remixes on a bonus cd.
What we got here is fresh sounding collection of compelling and modern electronics, nicely kicking off with the atmospheric dwellings of Inner Intrusion, followed by the expansive synth pads of The Space Inside, a warm, swirling but powerful ambient breeze with a slight

-flavour. Re:incarnation is next with its free form, captivating and overall airy soundtextures, after which the music on Neurogenesis turns a bit more groovy and dynamic form as soft beats and light sequencing enter the sound stage all together creating a moody and light downtempo ambientscape.
Re:synthesis takes on a experimental, more abstract but unpleasant form, vaguely reminding of

cinematic work Birdy. The same goes for the hypnotizing, slowly morphing Re:phlexess, a h2 piece found at the end of the album.
Airy, formless and fairly hallucinating atmospheres continue on S.t.a.r.s. and Re-versed worlds, ending up in gracious, uplifting ambient textures on the latter track. Time and Deep is quite a weird and inconsistent track after that. The last track is the dynamic, sequenced but not that coherent Sunlight.
Now to the second disc, which e.g. holds well-done atmospheric pieces such as Constellations of Mind, although the mechanic sequentials of the Terra Eois-version of Traces of Reality coming after it didn't grab me at all. After a moody intro, rather high-tech sequencing and dance beats lead the way on Structures.
Les Structures Logiques (featuring

. Innercity sounds like a neurotic beat-track to me, but luckily the next to mixes of the groovy track Neurogenesis after it make up for that in a positive manner. The other two mixes of the same track don't do it for me with their high-tech but also rather emotionless impact, which also applies for the two versions of the experimental flavoured Time and Deep.

Beyond any doubt, it is the most mature work in

) discography. Syntharsis 2009 is a special re-edition of

debut material, special insofar, as the Listener does not only get the original remastered album, but also a bonus CD including previously unreleased session outtakes and a bundle of remixes. The album is a fresh synthesis of "TD-getting-younger" - sequential electronics (

in their "Melrose Years" up until now), solid lounge and slightly clubby elpop. This record is fairly groovy - let's pay attention to marvellous bass lines every now and then - and still the best single word to describe the feeling throughout the CD would be "flow":

music is very "aerodynamic" and turns out to be a fantastically fluent electronic narration. There are neither "typically dynamic" nor "typically ambient" tracks to find here, rather all episodes are multi-mood, multi-track and poly-meaningful.

music is a "fresh-making" and a breeze-light one; one could easily imagine it as a film soundtrack - and indeed, it's worth mentioning how much in common some pieces here have with

Birdy - OST (1985): Rephlexes and, in the very first place, Resynthesis. Time/Deep, one of the album "hits" remixed on disk #2, could have been a

Geometry of Love - or Printemps de Bourges - piece on the one hand, while on the other hand we have here a nice piece of quasi

-ish mood in the chord-background (pick up some of

Homogenic or Post single remixes and you'll see what I exactly mean). As far as associations with

are concerned, they are just welcome in case of Sunlight (romantic piano line and nostalgic chords going along nicely with modern programming and various scratchy and crunchy effects). Very interesting are also Snapshots mechanical sequentials and a tasty spectrum of moods in Terra Eois, where

is quite successful indeed in deconstructing the artificial frontiers between "traditional" electronica, new-age, club-sounds and lite-ambient. It must be mentioned that

"art of sequencing" is on the whole very good and creative, it's not just another variation on TD-patterns, but rather a challenging, daring attitude, something like experiments by

, whereas the artists just mentioned successfully combined sequential and acid, but thats it, and meanwhile

style and technique are one step further, so to speak. Mature, developed, multi-layered arrangements are doubtless one of the finest

qualities here - this also has to be put straight. Last but not least, I really do recommend disk-two-remixes, especially the

of Neurogenesis, perhaps not really in

or Glitch style, but it is certainly pretty fine stuff as if created by such remixers as Bitstream or Kid 606.