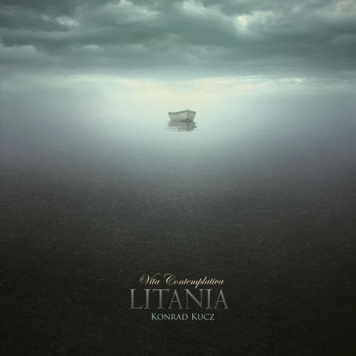 Written and recorded between 2005 and 2006, Vita Contemplativa Litania of the Polish synthesist

is the very first album of Poland label Polonaise Generator.pl. An ambient, dark and emotive opus which opens with an odd cosmico-monastery mass where a cosmic monk mutters an incantation propelled by sinuous ethereal waves. This galactic mass stops abruptly! And the intro continues, wrapped of heavy layers whose fine oscillations increase the gradually emotive intensity. Muttered prayers, intermingled with heavy resounding layers furnish Litania/Intro, initiating a stunning galactico-pastoral journey in the heart of dark and medieval ambient with a fine cosmic aura.
Vita Contemplativa Litania is a slow liturgy which oscillates between two universes on slow strata that move at the speed of cloister meditation. There are few movements. Only longs synthesized waves that float in suspension among fleeting choruses that murmur and espouse hardly audible dialects in a heavy atmosphere of sound cloister where only spirits seem to hold a right-of-way. Litania I is a succession of atonal loops which tangle up among placid sonorities and ecclesiastical elegies, whereas the resounding loops of Litania II are spreading like slow metalized elytrons. Fine arpeggios glean here and there with a delicate insistence, on a lineal movement that concludes with a dark organ which opens voices of a sidereal choral to the syncretic vocalizes.
Adeptly mixing the austerity of medieval monasteries to a cosmic enquiry,

weaves webs of a strange incantation to liturgical paradox on a succession of movements of unequal oscillations and Gregorian chants of a fragmented universe. Skilful,

knows how to mould his ambiances by adding to it of fine lines of bass, enveloping and fugacious layers as well as isolated choruses, increasing gradually and continuously the intensity of its work to reach a superb paroxysm with a very musical and poetic final where everything fits together in order to conclude a piece of art both mystical, dark and constantly intriguing.
I got to say that Vita Contemplativa Litania is not easy. It is a work torn between two ecclesiastical antipodes where the Renaissance seems to rebirths in cosmic spheres. It is necessary to listen attentively Vita Contemplativa Litania to appreciate all subtleties of this highly ambient work where the weak surges and sequences animate parsimoniously parts V, VII and VIII. But beyond the thin and short rhythms hide an astonishing intensity which climbs with hesitation among superb poetic layers (Litania VI and Litania X), in a fractionated universes where atmospheres as much cavernous as cosmico-tribal are in perpetual tugging. An astounding and astonishing work for fans of dark and syncretic ambient!

A lone Gregorian chant calls out over some of the most wonderful dark windy drones I have ever heard - then abruptly, as if a guillotine has fallen, silence descends. A mixture of wordless vocal and string pads now float through the ether. These have a slightly lighter feel to them - but not much. More really deep bass drones arrive. This is incredibly impressive- and we are still in the Intro Part 1 has a more metallic feel but even these tones have a deep reverberating feel to them. A slightly disturbing haunting quality is emphasised by the delicate and sparse use of more Gregorian utterances but these are not of the "singy" type, more like a mournful warning. Part 2 shimmers into life, it's like a spinning coin slowly winding to a halt then speeding up again. A most curious and compelling effect. Then in come some tinkling water droplet type notes marking out the most delicate of melodies. There is such a subtle beauty to it all but with a feeling of unease still hovering in the background. Again there is a sudden change as the warning chants give a single utterance then fade away leaving a simple organ line which at first is so deep that it hardly sounds like an organ at all. Angelic wordless choral sighs give a rather spiritual feel. Their memory slowly fades into the distance as we move to Part 3 More conventional Gregorian chants return, beautiful in their own right (and not overdone), their exquisiteness heightened by the most subtle of melodic sequences. Part 4 returns us to dark windy realms with doom laden string flourishes. The contrast with the previous track couldn't be more marked. Choral pads do soften things nearer the end but there is still a mournful feel to it all. The mood does lift again a little for Part 5 as things become rather spiritual again. Ideal for a quiet moment of contemplation from which we are awoken as the backing swells. It's as if there is a sudden realisation of something that has been eluding us. Part 6 lightens the mood still further- simply Heavenly stuff. The next part fills my mind with pictures of the cover artwork - a moody black and white image of a boat floating on a very still lake as the sun rises and the morning mist disappears. It's a very beautiful and serene vista / soundscape. A delicate sequence slowly rises as Part 8 starts to form. The subtlest use of chant colouring punctuates the wonderful pulsations as they seep into your soul then something is said and immediately we descend to silence. Part 9 starts with deep crashing effects as we enter more malevolent realms. It's as if doors are being slammed behind us, cutting off any chance of retreat. Part 10 sees no let up to the uneasiness as watery effects mix with eerie strings. Moaning from the long dead rises up from the depths of the dark lake. Clanging effects and the sound of something being thrown into the water heighten my dark thoughts. The Finale finishes things with a more positive and again "spiritual" feel as subtle organ mixes with gorgeous deep pads and just the slightest wordless vocal colouring. The sound starts to surge, even becoming quite euphoric but there is still a hint of sadness right until the end. Sure, this is an "atmospheric" album but that term simply does not do it justice. It is a masterpiece of painting pictures with sound and quite frankly I am in awe of Konrad's skill. Surely we must hear more from this guy in future. Musicians of this talent are rare in any form of music. I absolutely loved this album. A truly amazing release.

Mournful, enchanting chords seem to fill completely the dimly lit room: majestic electronic contemplation is the mood conjured up by

already with the first sighs of his fascinating, thoughtful, indeed intimate record. Wonderful alternations of elevated, but not at all exaggerated chords, arranged for electronic organ and choir, leave no doubt that

work is an impressing, sequential Stabat Mater of the XXI. century. If one would like to try to describe this music, one would perhaps say:

Meditationen - but it is a mere schematic analogy. Nevertheless, the Listener has to agree, that, as far as the formal side is concerned, with Vita Contemplativa Litania

writes the next chapter to contemporary symphonic music, whilst, as for the instruments used, he shows, in such an original way one can arrange larger musical forms, whereby nothing really new seems to have been said. The whole composition makes a huge impression, it is awesome and moving - and it also gives courage and hope. There is definitely enough room for all emotions which we define as great or important. If (and this is by

indeed the case) the whole album is not elevated in an exaggerated way, then, one might say, the artist managed to achieve a very good effect. Sequencer lovers will also not be disappointed - let us pay special attention to the marvellous (unfortunately, not really long) Litania 8...

This is the first release of the Polish Generator-label, and as the title already suggests, it's a nice contemplative affair into symphonic ambient music. I got the impression Litania is part of a series of albums of Mr

, as I found at least one other album under the Vita Contemplativa - moniker on his website. The highly atmospheric music of Litania, which comes in ten parts plus an intro and a finale, is of a free form, gliding and overall relaxing nature. It's a softly vibrating and pulsating textural tapestry with subtle sequencing patterns, occasional organ passages and Gregorian-kindred prayers, all spreading out its wings like sonic perfume. Some parts, like the second half of "part III" roam in heavenly spheres as the choirs fade in, while there are orchestral parts in "part VI", soon followed by the sedate, soft waves of soundscapes in the next part. This all make this a rather peculiar but rewarding 55-minute ambient recording which demands active listening.