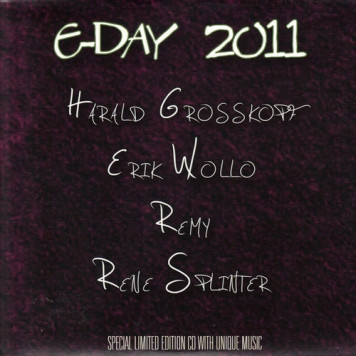 E-Day is an electronic music festival, organised each Spring (most of the time on a beautiful day) in theatre De Enck in Oirschot, The Netherlands. It is in the south of The Netherlands, close to Eindhoven, known from the Eindhoven School of electronic music. Together with E-Live, which is organized each Autumn, E-Day is one of the biggest electronic festivals in the world. It attracts spectators from countries all over the world. The organizers are Kees Aerts and Ron Boots who are also the guys behind the biggest electronic music label in the world, Groove Unlimited. E-Day 2011 had a remarkable occasion because Harald Grosskopf, a legend in electronic music, played his even legendary album Synthesist in its entirety. Other concerts were by Remy, a strong force in the Berlin School style, ambient specialist Erik Wollo and René Splinter who, next to Harald Grosskopf, brought back a lot of memories. Every E-Day and E-Live is accompanied by a special limited edition cd with unique music from the musicians that gave concerts at the festival.
E-Day 2011 has three tracks by Harald Grosskopf and Friends, two by René Splinter, two by Erik Wollo and one (but a long one) by Remy. Splinter brought back a lot of memories because his music reminds a lot of that made by Tangerine Dream in the early eighties. This includes the typical PPG Wave Computer-sounds which he generates in Bahnhof Zoo (the titles are also comparable with that of Tangerine Dream) and Tunnel Vision. Wonderful stuff! Remy (Stroomer) brings a soft rhythmic piece with excellent drums, sequencing and soloing that builds up and becomes more full as the piece progresses. Wřllo is a (grand)master of ambient. He clearly shows that on Ataraxia 1 and Ataraxia 2. The music, electronic by played through a guitar, reminds of the great ambient composers Patrick O'Hearn and David Helpling. Erik is a musician who needs to be heard. Festivals like E-Day and E-Live are great stages for this. Harald Grosskopf and Friends (actually the band Sunya Beat) bring E-Day live 1, E-Day live 2 and E-Day live 3. These are three rhythmic tracks (what else could you expect from a man like Grosskopf, who is the one guy that started drumming with sequencers during the days that he worked with Klaus Schulze and Ashra. An important place in this music is the electric guitar of Mario Heilhecker. The third track has a great opening. E-Day 2011 was, as ever, a fine festival with joyful concerts. These compilation cd's bring back a lot of memories to these great days. Let them last forever!