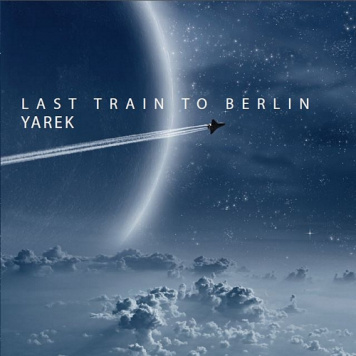 The word Berlin is very evocative for EM fans. And as soon as we find it on an album title, it stirs up immediately the curiosity. Normal, we think unmistakably of the Berlin School style. But it is necessary to be careful because certain name albums can generate a certain confusion, like this last album of Yarek; Last Train to Berlin. If the first rustles of Sutra suggest some lunar pads of synth which float as spirits of Berlin on the curves of a bass line and a soft hopping sequenced movement for get lost in some fluty Mellotrons, the rest of Last Train to Berlin is a beautiful collection of music pieces which are perfumed of Berlin School but which oscillate between the groove and soft techno. In fact, Jaroslaw Degorski offers a delicious mixture between vintage and contemporary with a lot of Jarre references on soft and floppy rhythms which surf at the limits of the ethereal ambiences where the synth layers to the vintages aromas lose their virginity on the kicks of sonic elements and more contemporary rhythms. This just goes to show that this last album of Yarek would rather be a last stop in Berlin school than a train to go further in this style.
Monopady plunges us straight out into a kind of e-groove with a jerked rhythm which bites of its bass line a structure pounding slowly in a sound universe soaked with voices and echoing hoops. These elements decorate continually the rhythms and removable passages of the 12 tracks of Last Train to Berlin. Lively and catchy, the rhythm is soft and crawls such as a big anaconda on uneven rocks while the melody weaves a pleasant earworm. The pot of sounds is rich and amazes while giving to each track its particular cachet. Bye, Bye Berlin offers a similar rhythmic structure which on the other hand offers more mordant and more velocity with good sequences and good strikings of bass drum. The synth layers which hum are very near Berliner style while the melody hangs on to chirping of synths and the ambiences feed on hoarse voices. Strange is the progression of Atlanta which offers a structure of rhythm mislaid between its styles but among which the percussions and the trumpeting voices add an unreal dimension to what one could catalog, if need be really necessary, as a tribal psychedelic. Europa Express brings us in the Düsseldorf school style with a rhythm always so crawling where vocoder a la Kraftwerk and the chirpings of synths fly over a rhythm torn enter its approach of languid groove and soft synth-pop.
Do I have to repeat that all this takes place in a charming sound environment? It's important cause without this element, tracks like Orbital, Echo, Hokato and Banco, where the rhythms are broken at will, would be good copies of groups like Orbital, Future Sound of London or Leftfield. For me, Smolensk is the piece de resistance of Last Train to Berlin. The rhythm is evasive with a superb bass line which oscillates with musing, spreading an ambient rhythm which serves as pretext to lay down the only real melody of Last Train to Berlin. A melody of the tales from the Arabic 1001 nights forged in a synth and of its solitary singings that some chords of e-piano carry near to the door of melancholy. This is a wonderful track. Music Play brings us into Jean Michel Jarre's lands with a curt and incisive rhythm. But an ambivalent rhythm which oscillates between techno-dance and ambient and which pounds on stunned sequences and very edgy percussions. The portion of the Gothic choruses is simply stunning and unexpected. The title-track spreads all the opposition of rhythms and ambiences of Last Train to Berlin. Ambivalent, the structure hesitates between the hard and pure rhythm and its lunar moods while the harmonies are bribed by a synth which paws the ground more that sings. The 8 minutes of Last Train to Berlin sound like a recapitulation of the whole album where the robotics voices, vocoders, ethereal choirs and layers of synths to the aromas of Berlin School are interlace and evaporate at the whim of a structure which takes advantage of its 8 minutes to give a very good outline of the artistic duality from this last opus of Yarek.
Sylvain Lupari