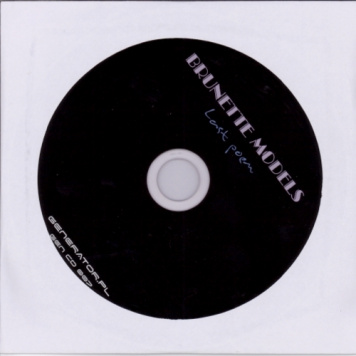 Another musical project from Generator.pl label, Brunette Models is the alter ego of Peter Krzyzanowski, a sound sculptor from Torun in Poland. Sound sculptor because the music of Last Poem is an interrupted suite of sound samplers over sound effects, molding an odd architecture of sounds where the fusion of ambient and abstract gives birth to some rhythms lost here and there, giving a relief more than particular to an album that plays as much as the wear of time as the effect of contemporaneity.
After a short introduction where an oscillatory wave opens Brunette Models 5th opus, Call Him Dr. Moog starts this strange musical voyage that tests out your cerebral limits. Peter Krzyzanowski explains the Moog functionalities through a multitude of sound samplers which form a bizarre musical sphere where stray piano notes float heavily around space voices, cosmic streaks, static interferences and fugacious hip-hop rhythms, when not techno, in a long sound wake where sinuous eclectic sonorities mold a slow movement of a huge UFO. A dark and cosmic track that depicts the paradoxical artistic approach of Peter Krzyzanowski who continually forms musical structures from a full array of finely elaborate sonorities. Birds chirpings, ducks quacks and oars strikes that dig sidereal water, In the Garden of Aphrodite flows on a smooth bass line with soft pulsations and delicate tom-toms which recall the syncretic and poetic musical universe of Johannes Schmoelling on Wuivend Riet. One track out of some which easily hook the ear with Lemessos, This is an Empty World and Searching. With Fly With Me Margo we plunge in Peter Krzyzanowski more than abstract musical world. Divided into two segments; the 1st part offers a very syncretic intro, a bit hostile to the limit, with its long metallic layers which squeak in a placid atonal universe whereas the 2nd part is more poetic with fine pads of delicate a synth which waltz around keyboard keys, scintillating and tinkling among variant strikes of piano notes.
And thus Last Poem ravels. Each title is structured of much metalized linear movements where strong sensations of fright, discomforts and paranoia travel on ingenious samplers and ephemeral rhythms, as on Anadyomene' Secret. Soft and melancholic, Lemessos is a suite of violin layers that progresses among fine loops of which reverberations are widening in an wavering morphic ballet. Picture of your Mind explores the same patterns, but with a darker approach where metal streaks moo among waves which break lethargically in loops. Layers of synth animate a syncretic atonality whereas metallic beats form a minimalism and hypnotic tempo, such a tick-tack of a clock without time, before permuting in a slow tempo which beats under a tetanized fog. Madame Charme offers chords in suspension which wander in a strange abstract world with much metalized scents before a dark nursery rhyme spins in a light carrousel of fear beneath violin layers with metallic chords that a dusty fog wraps without never really smothering it. Even with an absence of rhythm, This is an Empty World is not absent from life. A long lineal movement filled of strong emotions and slow mislaid rhythms, This is an Empty World does not leave indifferent because of its propensity to introspection on a structure where the melancholy and syncretic poetry abound. A very beautiful title, just like Lemessos and Searching!
Although the rhythm is not very present, that there is no sequential movement, Last Poem is a sound adventure that goes well beyond the simple musical lifelessness. It is dark and sad while being rich and full of emotions on lineal structures filled of sound samplings and isolated rhythms which destabilize and intrigue with a strong feeling of sound immersion.


The musican behind Brunette Models is one Piotr Krzyzanowski of which Last Poem is his fifth release. It's a work of edgy atmospheric ambient with crispy elements, offering a strange combination of occasional female voices, down-tempo break beats, dreamy textures and experimental/abstract sonic outings.
Despite several harmonious chords and contemplative interludes, theres a certain restless and weary feel embedded inside the ten sketchy, strongly individualized sound abstractions which makes it hard to get hold of, at least for me. The only exceptions are the eight track This is an Empty World, an intimate, flowing soundscape that realms somewhere between Satie and Biosphere, and the sequenced passage in the second part of the ninth piece.
The other pieces are formless chill-out adventures lacking direction and intimacy, they feel like a cold glacial blanket, deliberately keeping the distance.


Brunette Models makes very good ambient music, skillfully combined with dreamy, slow-motion club music, murky vinyl lounge and subtle solarized downtempo-breakbeat. Listening to this record we may have free floating associations with music made by such as artists as Centrozoon, Biosphere, Ian Boddy, Robert Rich or the Aerial Service Area project, but it would still be sketchy, spontaneous impressions, insofar as the brain and only member of Brunette Models, a certain mysterious philosopher Piotr, has a great talent as far as painting of strongly individualized sound abstractions is concerned. Frankly speaking, each single episode of this fascinating album is worth the Listener's while: be it an ashy park closed in a bottle dreamt of in the fourth piece, be it a creamy river of wax flowing uphill in track five, be it a hall of distorted time-measuring devices as pictured in the sixth impression, be it slightly irritated autumn on Erik Satie's working desk in piece number seven... I have no problem imagining track eight as a musical jewel shining bright on some sombre, ultracontemplative record released by Fax Records (just to make things clear: it's a great compliment). And as soon as we start to think, what we are dealing here with is a musical trip towards the darkest and most formless clouds of oblivion ambience, there suddenly appears - in track nine - very well-tempered sequential electronica, with a gentle touch of intelligent sense of humour. Yet another masterpiece: glacial impression number ten... So much for this record, then? It seems to be a short journey indeed... Just push play, again and again - which I do recommend.