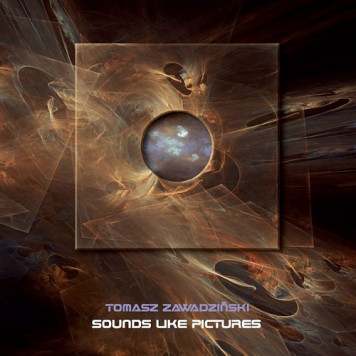 Behind this sublime artwork hides a more magnificent album. Sounds Like Pictures carries easily its title. Sonorous images that

draws with a magic dexterity will undoubtedly please

fans of a more metallic and innovative period; the

years. Originally composed in 2002, released in 2008 by the Polish label Generator pl and distributed by Ricochet Dream label, Sounds Like Pictures is a wonderful album where 3 long music pieces to progressive electronic flavors of the 80's fill our hearing with a forgotten nostalgia. An album which will become an unavoidable to your discography and where the Polish synthesist weaves a sound fusion as complex as melodious, like those great music moments created by the mythical German trio formed by

.
Metallic waves entangle in a cosmic sound labyrinth very well structured and full of imagery on Sounds Like Pictures' opening. Towards these galactic waves and its intersidereal breaths, the synth crumbles metallic serpentines which scroll among morphic strata to very metallic shapes. A slow intro to cold spatial aromas where the electronic universe shapes perfectly to the progressive one, in particular at around the 5th minute when a warm atmosphere settles down with a synth with a synth of which slightly fluty breaths of air float uninhibitedly in an atmosphere very near

on Wish you Where Here. Their synthesized waves are perturbed by the arrival of the other waves more motley and metallic, moulding a sonorous world to stunning paradoxes where, quietly, the electronic universe of a

first version settles down in a foggy to vapors of ether. The first steps of a sequencer pulse under mellotron layers, introducing a shy rhythmic under violin strata. The rhythm becomes steadier, beneath the pulsations of a sequence to the beatings of a drum, while the synth fulminates splendid warm and suave solos below hiccupping chords of a discreet keyboard.

doesn't just content to amaze with this intro to hybrid influences. He plays with his cadences and transposes his rhythms among brief atmospheric passages where the synthesized waves shape to

tones, grind in the tones of Dream, on unexpected rhythmic permutations and long and sinuous synth solos.
Impulses of Abyss opens with a synth to slow and sinuous reverberations, drawing a cadence just as much heavy and sensual which doubtless influenced

world, cause it's the first impression (printing) that jumps to ears while hearing it. A slow and heavy rhythm which progresses under beautiful limpid percussions and under heavy mellotron strata, bringing us back to

strange years, but with a sharply more fed cadence. A great title and by far the most beautiful on Sounds Like Pictures. Walk Towards Sequencer's intro reminds me of these foggy percussions that we heard on 86's

tour. Still there, a metallic intro which leads to a soft cadence encircled with hopping keys of a keyboard which are moulding marvelously to alternating sequences and a synth to juicy and finely chiseled solos. A good title that preserves its hopping tempo, but with a synth to hybrid tones of which

likes switching around its ethereal movements, while shaping very good solos. Short and atmospheric, Swamp of Reverb soaks in a melancholic atmosphere while Running Through The Rhythm really runs towards a nervous rhythm, seasoned by superb mellotron strata which waltz with ardor on a frenzy cadence.
We can't stay indifferent to

music. Even if the Polish synthesist seems definitively influenced by the sound universe of

, the fact remains that the man amazes by his great versatility in and, doubtless the big strength of Sounds Like Pictures, in his synthesized universe where he multiplies hybrid strata and cosmic atmospheres soaked of long solos in unexpected forms and random surges. Very beautiful albums which we listen to with surprise, so much that developments of a Berlin School still virgin are at ears reaches.

According to the press info,

Sounds like Pictures is a highly cinematic sonic experience who's sound is deeply rooted in the Berliner School sequencing tradition. The almost 20-minute title track starts out atmospheric with rather flat and artificial sounding mellotron textures, but soon

album Wavelength but also their classic vintage albums. The 19-minute melodic Walk towards Sequencer is next, nicely following in the steps of quality Berliner School sequencer works with a lengthy, joyful and well executed solo on top, which in the second half gets a bit too rough and freaky to my liking. The album comes to a closure with two short tracks of four and five minutes each. The free form sculptured Swamp of Reverb is a melancholic sounding ambient trip while the sequential electronics, vintage textures and dance rhythm of Running through the Rhythm take a dynamic step ahead, revealing a glimpse of what's coming on

next album (according to the press info).
All in all, Sounds like Pictures is an accessible album worth a listen.

Already by the first listen given to

album, the title suggestion will not disappoint us - indeed, the artist's pieces are very suggestive as far as visual associations are concerned.

work is deep-rooted in the Berlin sequencing tradition, whereas he represents this party of the Berlin School, which is by no means afraid to explore new musical teritories and experiment on them. Already the title track is a good taster: the first half of the composition explores spooky deserts a la Ultima Thule Part 2 by

, while the second one injects the Listener out of the dark and into some rhythmic lands of pulsating sequencers, dreamy arpeggio-clouds and wonderful intuitive improvisations. Impulses of Abyss conjures up a metallic flanger mood, in which mysterious sequences now dissolve, then freeze. Pay attention to the vast background soundscapes, as if coming from some obscure Salvador Dalí dream or the long bygone "Pink Years" of

. A slight decrease of speed, whereas the sounds get more metallic, distorted, and grungy - here comes the next piece, Walk towards Sequencer. This 19-minute-piece brings quietness and some elements of tightness simultaneously. Swamps of Reverb, a very short one, is surely one of the most appealing episodes of the CD. Rather ambient as Berlin-like structures are here wrought in fantastic electronic fabric a bit like in

Lore. The coda, Running thru the Rhythm, is a good piece of music in which sequential electronica, Pink-Years-TD-moods, IDM and very sophisticated trance join forces. In such a way, tradition and a close look into the future get unified. Let's hope, this knot will become the starting point for the next album by

, and let's hope, another interesting album of this artist will be coming our way very soon...