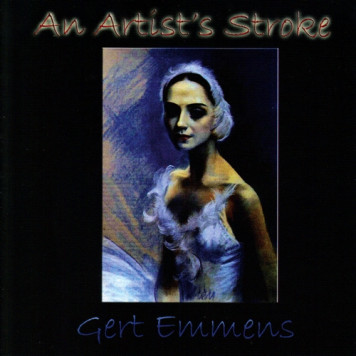 The latest album by Gert Emmens, An Artist's Stroke, has totally taken my senses over. This time, Gert's vivid palette of sounds is a homage to russian painter, Yuri Pugachov, whose astonishing portraits had been used as a cover of Nearest Faraway place vol. 2. The newest album is all about the life of this russian painter. He was a very gifted man - despite painting, Pugachov had been also into arts in general, and surprisingly, at some point of his life he had become interested in ballet. Gert Emmens in the first track of his musical homage introduces us into quite a spiritual bit of sequential electronic music. The music is specked with mellotronic passages and charming melodies. Next, music in the Cossack temperament accumulates its power to eventually fade out, having its emotions cooled down and going to the next excerpt of the album which is The Long Walk (Towards the Black Sea). We can clearly hear the pulsating and swinging bass pattern, which sprinkles melodies which are on one hand gambolling, but nostalgic on the other. Moreover, the emotions are intensified by blossom analoguish synth lines. The second part of this stroll is filled with sequencer's swinging ostinato and melancholic orchestration which are undoubtedly well-known for Gert Emmens fans. This music is typical to his taste - full of oneiric manner accompanied by beautiful spiritual synth solos. It fits very well with the album's concept of "romantic spirit of Yuri Pugachov". It is a musical description of emotional states during ones life.
Next track of this album - Paintings - the Themes - literally paints us sound pictures full of dignity, peace, and some kind of reverie. The piece shimmers with sparkling synth lines which, personally, put me in a state of hypnotic trance. Every single note seems to be placed just where it has to be, having its reflection in spiritual paintings of Yuri Pugachov. Similarly - this reflection also takes place in the next track, Paintings - The Spirituality Behind it. I think that romantic works of dutch electronic music wizard conveys the spirit of russian painter. Listening to this piece, I can't get rid of impression that only Gert Emmens, with his mystic manner, is able to place a listener in the artistic world of Pugachov. Listening to such beautiful melodies - I see pictures. Looking at pictures - I can hear music. This seems to be beyond belief, but thats the way I perceive it! Now it's time for my beloved piece from the album - The Leningrad Years. It starts with the beginning by Cadenced Haven after which there's a - literally - feast for Gert's fans. His friend - Ruudi Heij, who absolutely enchanted me - is in charge of sequential parts. I believe that those of you, who are used to Emmens - Heij duo, will love marvellous playing of these gentleman. This music hooks to its unique magic and leads us to Darkness Unfolds. Indeed, the title suggests an obscure mood although it's not entirely minor since the music sometimes flashes with pulsating patterns like comet in the sky. The end itself is very moving and astonishing. Somewhere from darkness a russian choir appers singing an old song... It sounds pompous and unbelievable in the background of oneiric electronic clamors. The album's closing track, Yuri Pugachov - In Memoriam, is Gert's personal dedication - a short musical tribute to Yuri Pugachov. Thanks to Gert Emmens, he isn't forgotten. Gert's emotional music helps to get inside the world of this already dead russian painter.