Music for Subway - Symphony for Analogues 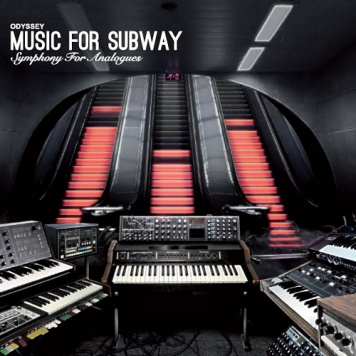 At the time where digital and software synths are invading the studio recordings and basements of EM composers, the analog gear is quietly resurfacing. Sculptor of sound and musical textures, the Polish synthesist

decided to pay tribute to the cradle of his influences by composing an album completely conceived analog equipments. Music for Subway (Symphony for Analogues) is a long electronic symphony which lies on 20 paintings divided in 2 acts.

plunges the auditor into a surprising sound immersion of a musical universe that has no borders and where the cosmic ambiences embrace some fine rhythms pushed by oscillations with sophisticated curves. Even if the influences of Tomasz Pauszek go from

, Music for Subway (Symphony for Analogues) is drawn from

. In brief, it's an attractive musical cocktail which lets hear all of its magnificence with a good pair of earphones. After the music for airports and for elevators, here is all the new quintessence in analog electronic art; music for subways.
Like when we are entering in a subway station, Music for Subway (Symphony for Analogues) displays its ambiences with some dense cosmic waves which pass over the passengers and break out through the banisters of Station1 with a hiccupping rhythm which rolls in loop under suave synth harmonies. You think of being in the lands

? You are completely right! The rhythmic approach and the harmonies are terribly near the melodies and the film music of the French cinema. The tempo is charmingly old-fashioned and comes close of the underground paces of Space Art with a synth of which the shrillness breezes forge an electronic melody which sings in our ears with a disconcerting fragility. These strident blizzards rush into Station2 such as howling of Martenot waves which float and roam among the colorful jingles of a cosmic streetcar. Throughout his electronic analog symphony,

mixes skillfully the rhythms and ambiences with an attractive and creative melodic approach. Station3 is superb with its ghostly rhythm molded the in amplitudes and reverberations which roll in loops under the jingles of cymbals and spectral breaths in an Aeolian oblivion stuffed of an incredible sound fauna which separates the rhythm of its rhythmic envelope. Mainly statics, the movement offers fine variations which modulate Station3 into a long cosmic delirium. Station 4 offers a heavier pace which pulsates with frenzy into a tunnel decorated with ochre smoke and blue electricity. Station 5 is a sweet symphony that could be likened to a dark melody for the Phantom of Tramway with its tones of organs cooing in the shadows of its harmonies. Station 6 offers a beautiful lunar melody which sings under a bed of arpeggios teeming of an intestine life. After a Station 7 akin to Station 1, Station 8 deploys another beautiful melody finely cut in the echo of the synth loops which sings under the fat impulses of a cosmic train rolling into some intergalactic disturbances. The fine melodies moulded into French melancholies are following one another on this first CD which concludes with two serenades to odors of spiritual virginity.
Disc 2 opens by a threatening approach with layers of organ tones which stack in a cosmic universe, paving the path to the very nice Station 12 and its lively rhythm a'la Oxygene of which the sound effects are papering its background. After the floating and strident Station 13 and Station 14, Station15 gives a fine oscillatory rhythm which undulate among crystalline arpeggios dancing in parallel of a pace which spreads its heavenly harmonies into the structures of Station 16, one of the good tracks from Music for Subway (Symphony for Analogues). This CD 2 is a bit more ambient with short titles more cosmic than rhythmic, like on Station 17 and Station 18 where

moods flood our ears with a cosmic poetry which is good to hear again. Even the rhythms are embedded in these dreamy moods, much like the rotary motion of Station 19 which cannot get rid of a linear stranglehold to interstellar ornaments. Station 20 concludes this symphony of analog sonic textures with an abstract pace that some fine celestial harmonies are turning into a role as much obscure as absent.
We cannot like Music for Subway (Symphony for Analogues) which is an enchanting album build around the influences of an artist who literally propelled the cosmic music out of orbit. One would believe to hear

in every corner of this latest opus from Odyssey which is a pleasant lunar symphony with a multitude of delicate rhythms which take refuge in the tranquility of the Mare Tranquillitatis. It's superbly beautiful and poetic. One has always this feeling of floating between two worlds which, if they are not to wear feet, are to wear ears.

CD1
Out of the darkness, there comes our subway - now we can join the sound-journey through underground labyrinths. At about the second-minute-mark pure environmental sounds turn into a splendid sequential composition containing many Oxygene - and Equinoxe - like sound effects. Pay attention to the spicy and fantastically produced rhythm-line - well, it really could be a piece conceived by

...
This enjoyable introduction flows into the aerodynamic ambience of the second track. Those who are in love with sequential electronica will indeed be fond of the static, cloudy chord accompanying the leading synths. Soon a thunderstorm is coming - with the 3rd minute mark the sweeps and washes of strong wind seem to want to blow the speakers! The third track is an ingenious, nostalgic tale one might associate with

Another Heart Breaks - just listen to these echoes and light traces in an endless electronic tunnel! Here we also get a nice Berlin-fashioned solo. Every now and then, one thought comes to mind: it's pretty hard to name the best track in the whole set, since already the very first notes of each impression are truly magic, deep and dreamy in a very special way. Now we may enjoy the fourth piece; what we are dealing with here are mainly "laser-harp" sequences, the whole piece sounds as if it was played on invisible, hard-to-catch neon zigzags. Truly hypnotic, strong ten minutes.
The next track is somewhat close to the early works of

. All important ingredients are there: high-places moods, pitch changes, melodic and yet very original tunes joining each other in electronic cascades. After only three minutes of this amazing mood there appear the polyphonic structures of a sequential concerto for a rainy day. The seventh piece covers suddenly the arpeggios of the former track with majestic chords; soon there joins in a groovy rhythm and a nice solo. The eighth track pulses with a bass - almost "motor-bass" - rhythm sequence; now our wagons slide through tunnel-labyrinths at a tremendous speed and the only thing accompanying our journey is the jarring light of spectacularly stereophonic sequencers! The final piece of the first CD once more conjures up some

-like atmospheres, but the nicely chromatic synth-solo and a swooshy percussion line give some new quality to it. As a whole, this piece also reminds the Listener of a marvellous Time-longplay by the

CD2
The first track is a majestic tale that is being painted on cold-chord canvas. Not even four minutes have passed and there appear some beats - marking the entrance of the second piece - accompanied with a lively sequential structure, forming an interesting contrast to the quiet chords.
The third composition is probably the most abstract one in the whole set; among endless dreamy clouds we suddenly see fluorescent sea-horses and match-stroke-chains - or perhaps it's only a cognitive illusion?... How long has this journey already taken, where are we at all? As if awoken from a strange dream, we take an entirely astonished look at our surroundings. Because of the truly "arctic" atmosphere of the fourth piece we can easily imagine that we are entering a numb endless tunnel built from ice and snow - this track is an utmost beautiful 3-minute ambient composition.
Our fifth station is a polyphonic arpeggiator construction, now and then flashing about with its blue ounces of electric light. As soon as we enter the sixth piece, our wagons begin to move faster and faster, once more through a creepy snow-ice-tunnel, but now everything's filled up with life, everything is moving, flashing, endless lights are being reflected and distorted... Along with the seventh track the wagons slow down, it seems that we have ceased to move forward at all - or perhaps we have just started a motionless dream? Once more we don't have the slightest idea where we are and how long we have been travelling, and still this hasn't a bit of an uneasy feeling to it!
The eighth track captures us with its fragile crunchy sounds - we are moving through navy-blue pipeline-labyrinths. Thanks to the chilling atmosphere of the ninth piece we may find ourselves in the real world again. With a groovy sequence in the background we begin to recognize faces of all the passengers, there is nothing alien behind the wagon windows, everything sounds earthly again.
We are leaving on the tenth station. The echo of the corridor amplifies the sound of our footsteps, chilly chords are calling to each other somewhere near, the world awakes, even the first rays of the rising sun are already there, chasing us out of the subway tunnel. The staircase of the mid-tempo sequence carry us out back to the ground level. It has been an amazing journey indeed...