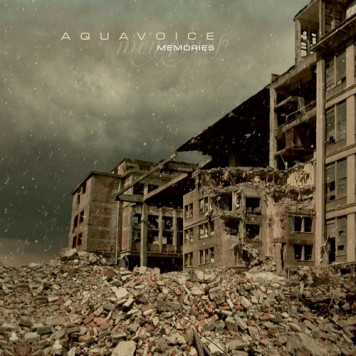 After an album so syncretic, abstract and atonal such as Cold, we were able of asking ourselves what could we expect from the Polish synthesist Tadeusz Luczejko. Memories, 8th album of Aquavoice and 2nd on Generator pl. label, is no more and no less an extension of Cold. An album of which the multiplicity of sound collages abounds in a heterogeneous musical fauna where the statism (fixity) and the abstract are in constant duality with soft harmonies, rhythms a la Portishead and Spyra on ambient passages which have nothing to envy of those from Brian Eno's surrealist musical world and electro acoustics of Plastikman.
Creaking static noises astride a reverberating loop on News of the World opening. Percussions in felted banging charge on a pulsating line of bass, shaping a delicate tempo of soft techno which gives a minimalism rhythmic surrounded by strange dialects of an animal fauna discovered by Johannes Schmoelling on Wuivend Riet and a mixture of exotic languages. News of the World opens in strength and will be the only title of Memories to offer a good rhythmic constancy. North and News of the World II offers structures soft rhythmic tendencies, but they are a bit more smothered and tempo is developing gradually, after soft foggy passages. Nostalgy, Old Ship, Lonelyness and Mirror are familiar journeys where the abstract world of Cold merged with ill-assorted sound elements in a vase of ether. If you loved Cold, these will charm you for sure. Dancing Snowflakes offers an unknown variance by Aquavoice, a little as Memories, with a slight rhythm' groovy bass with a suave and warm tempo which embraces fragrances of a jazz misled in its spheres. Tracks that are very near the Spyra style. With its thunders and showers Autumn, quite as Labyrinth, brings a very melancholic, even gloomy touch to a sound universe always dressed in its tones as varied as the areas visited by a horde of artists to audacious sampling. After a heavy atonal intro, where voices of a parallelism world goes alongside to quirky tones of a syncretic universe, Tycho B. adopts a soft hypnotic swinging to light pulsations flooded in twisted resonances and synth to bewitching solos. A title which subdivides its structure to embrace a softer and moving final, shaping one of the good tracks on Memories.
After the very introvert Cold where the rhythms were rarer than the oxygen on the Moon, Memories develops a soft rhythmic envelope with a multitude of nuances and feelings. Soft progressive tempos which cogitate between two worlds to cadenced paradoxes, submerged of a flock of sound effects at once innovative and standardized by groups such as Portishead, Death in Vegas and Chemical Brothers (especially at the levels of old lp's static and clicks).
In brief, it's kind of a Cold but with more heat and relief!


Aquavoice had once recorded for Generator.pl a soothing, ethereal CD entitled Cold - his next album, Memories, provides the Listener with yet more fascinating moods, some of them quite surprising, some of them ingeniously suggestive and associative, as if taken directly from some surreal dream. Analogue, digital and computer tones get mixed into one melange together with assorted nature sounds and additional sample loops. What kind of music is this, actually? Hard to say indeed, insofar as Aquavoice's impressions stretch out over typical classifications, as far as melodies, arrangements, structures and moods are concerned... The dynamic piece News of the World bears some resemblance to moods created by the New Composers from St. Petersburg, whereas the next piece, Nostalgy, brings with the loop-pattern of a dusty sliding turntable some memories in sepia brown: Is it some familiar place from the Listener's childhood, or is it the fabulous Everglades-park? In any case, here we are dealing with probably the most beautiful piece in the whole Memories - set. Still, the crunchy freezing nostalgia of sleepy electronic bits in Dancing Snowflakes or jazzy relaxing chords of Autumn, dry-leaf-like sifted through the sleeping hourglass, while the rain is still pouring outside, are equally fascinating and sound equally fresh. Track 5: Mysterious meanders of Labyrinth get marked with percussive sips leading to further confusing scrubheads lurking in the vibraphone weather. We take a walk through a deserted old town as soon as Tycho B. begins, here we are dealing with electronic moods quite similar to those conjured up by Tangerine Dream on the Flashpoint - soundtrack, and still coming from some thoroughly different dimension. Old Ship is one of the most abstract pieces on the CD; disintegrated in associative, freefalling tones, it fascinates with its overall mouldiness. Then comes the title-track and the Listener can arrange some long forgotten photos, to read some new, rattling and chirping meanings out of them. Loneliness balances on the edge of lonely sadness and lonely bliss. And what is hiding there, in these odd spongy pipelines, leading to a grayish cloud of fluorescent cotton far away in the North?... Listen... Part Two of News of the World seems to be a picture with no frame - or perhaps a frame without a picture - a tiny mood of quiet beats scattered around, a puzzle left on the table, which can be seen only in the mirror... Perhaps it is this very Mirror, to which the last piece on the album was dedicated: We discover, that the room-reality and the mirror-reality are two quite different worlds; we notice the most significant discrepancies, while we stroll to the abstract rhythm of the hourglass-ambience. What can I say... Big respect, it is such a suggestive, impressive and puzzling album...

Bernd Kistenmacher
Beyond the Deep
73,85 PLN