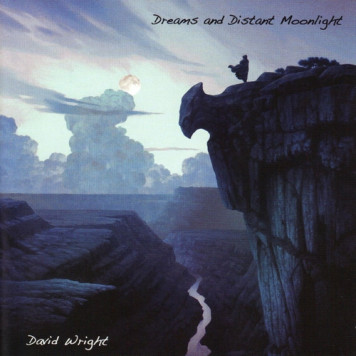 David Wright continues to produce music of a high standard and this epic new studio album is no exception and may well be regarded as one of his finest works. Fifteen interlinked tracks spanning a colossal 77 minutes of music that is stylistically a cross between Walking With Ghosts and Continuum. The album features Andy Lobban and Nigel Turner-Heffer on lead and bass guitars respectively and there are also some vocal textures that will no doubt draw comparison with Code Indigo. However, this is a very definite and very classy David Wright album.
There is some gorgeous piano, particularly on the track Dreams, lots of trademark synth solos plus inventive rhythms and sequences on Just an Illusion and State of Confusion while David's string arrangements have never been more inspired on Cry to the Moon and The Canyon. Other tracks like State of Bliss with its evocative guitar and stunning blues arrangement, the sparse Heatwave in Blue and the Klaus Schulze inspired Amorphous highlight that David Wright is prepared to take risks. He is also able to multitask and present different styles on an album, remain cohesive and not deviate from what people recognize as his core emotive style. Huge in scope and recalling previous epics like Cassini and Sea of Dreams this new album will be a real treat for fans old and new.