Spirits of the Dust 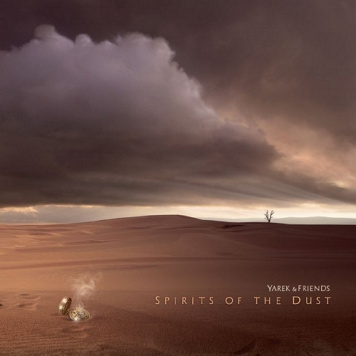 Yarek (Jarosław Degórski) is a well-known composer and performer in the electronic music metier; the Generator.pl label released already two albums signed by this artist: Noc na zamku (A Night at the Castle) and Organix. This time Yarek decided to dust off his oldest electronic pieces, rearrange them completely and (re)record them with a little help from his friends. The introduction is a pretty tough try-out: classic electronic sounds intermingle with solid rock guitar-riffs, so that we are dealing here not only with fantastic moods as if taken from the craziest Redshift dream, but also with some industrial spice to it! The second piece is a quieter one; still, it's not just dreamy ambience in a major key, but a wonderfully swinging dialogue between soft keyboards and an improvising guitar - it would have been a "top hit" on Future of the Past or Invisible Fields, had Yarek been invited to Wolfram Spyra's jam-sessions... This track is a brilliant melange of nostalgia, gloominess and some tricky sense of humour and remains so far my favourite piece in the whole set. The third impression is one of the biggest surprises as far as this album is concerned: aggressive beats, guitar sounds even harsher and harder, and, last but not least, there comes this female voice in the oriental manner (plus some additional ethno-elements)... Believe it or not, I couldn't help but think about Crossfire by Die Krupps (!!!), so what we are dealing here with is a definitely daring CD, how far from typical sequential EM moods, but still, how cool! In the fourth track, the ethno taste gets still more exposed, whereas the background gets rather traditional, exit harsh guitars. The fifth piece is a fantastic sequential block in a mid-tempo; while in the background you can hear shiny, ashy patterns of sequential snowflakes, the leading tune is sung by several female voices, once again oriental-tuned. This impression has very much in common with some of the moods conjured up and explored by Klaus Schulze on his newest releases (Contemporary Works II, Moonlake, Kontinuum) and is indeed that great! Track #6 is quite surprising, this time Yarek combined classic electronica, upbeat ambient a la Autechre or Fanger & Siebert and a bit of acid - with some female voice ornaments sprinkled over it, at first once more in the "new schulzean" mood, then turning into something a bit like wordless paraphrases of Blue Fiction's catchy tunes. In the seventh track there appear once more some distorted guitars, this time they become background for an unconventionally arranged "theatre soundtrack", though. The next piece is probably the most "conservative" one in the set - this composition really does sound like Tangerine Dream's film music in the early eighties - but even here there is enough room for the overall spookiness and gloominess. The final track is a quite optimistic (which is not the same as "quite mellow", however...) electronic hymn with further schulzean chants and additional moody synth-figures every now and then. The music gets prouder, sharper... and all of a sudden, it just fades out, comes to an end. It turns to be such a short album - or does it only seem to be so? Be it as it may, this CD is a brilliant puzzle of moods, inviting you to take the astounding journey once more and then once more, you may be sure that there are even more wonders to be found and explored...

We ship to 1 days
Delivery of the registered letter is available from 6 EUR.
Shipment provide post office.