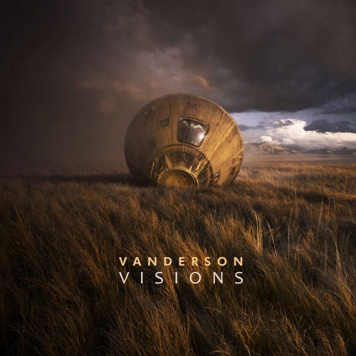 A few thoughtful electronic thuds, some distant sweeps of cosmic wind... Slowly the curtain falls and we may cross the border between this everyday world and that visionary one created by

. In the second minute of the opening impression there appears, like a frosty drawing on a window pane, a hypnotic sequence in the good old Berlin style. As time goes by, further instruments join in, the atmosphere gets hot and sticky and yet ethereal... Are we travelling over mountainous roads through some ancient tropical forest, like it was 1977 and we had

Sorcerer-LP spinning on our turntable? The musical piece is wonderfully gluey and unreal in a very special numb way, it seems that this music is coming from some unknown dimension. Rainy arpeggios in the second half will awaken the Listener a bit, but they will also supply a load of melancholy.
The second track is a nicely groovy journey through shining, shimmering desert sands - our footprints have a flutish-sequential shape, whereas the tumbling clouds over our heads sound like

chords from Oxygene or Equinoxe. The composition has a unique melodic touch to it; the musical feast lasts about 8 minutes, but all the main voices suddenly begin to disappear and dismantle, the only actors left on the stage are electronic subvoices, unformed thoughts, voiceless full-stops... until only silence reigns.
Slowly awakening murmurs let the Listener know that the third piece has begun. This is the most "Berlinian" impression in the whole playlist, one can hear not only some echoes of

frequencies have something in common with their

. This 13-minute vision gets complicated and ornamentated, there appears a hypnotic rhythm-line, from the foamy sequences a powerful solo is formed. As if it still was not enough, we will hear amazing mellotron "chorals", so that the pumping sequences may turn into motionless mouldy stones.
The final track is slower, dreamier, has a deeper shade of ambience. The beginning of this piece is the same deep black electronic water as

Blanche. As time goes by, the mist disappears and a solemn sequence is built - once more with a lot of hypnotic atmosphere to go along with it. A very

solo marks the plot point of the composition; the sequence drives higher, there come even more emotions, recollections... It's a pity that 13 minutes and 40 second do pass away so quickly... The piece ends all of a sudden, as if its main sentence hadn't been said to an end... The best thing for the Listener to do is to push the "play" button once again - and drift along, towards some other tale, some other dream, some other vision.

music is visual-rich and visionary indeed.

is part of this invasion of Polish musicians who embellish the EM scene for the biggest pleasure of our ears. Influenced by Berlin School, both vintage and new,

composes a music which oscillates constantly between these two universes, caressing sometimes the cosmic meanders and its tones so metallic as heterogeneous established by

, at least on Visions, in conformity with what would be completely suited to call today; the Poland School style. Visions is his 7th work and his very first on the label of his native land; Generator Pl. An album which will please undoubtedly the fans of old good Berlin School.
Sounds of gongs cross the ages, resounding among fine cosmic streaks and its winds which blow to scatter a cosmic silence. Fine sequences drum. Their delicate and feverish palpitations draw the souvenirs of a distant musical world furnished by the art of

to modulate silk rhythms. A soft celestial flute covers this fragile poetic tempo which quietly goes towards an atmospheric passage where solitary chords roam among the singings of crickets and threatening reverberations. We are a little after the 6th minute and Vision Part I escapes with sequences which skip with more ardour. Sequences to crisscrossed strikes which intertwine in the doubloons of their hasty succession, moulding these nervous and hypnotic rhythmic which made the delights of vintage Berlin School of the

sprays with copious synth solos and heterogeneous electronic tones. This rhythm at the same time soft and nervous fed the skeleton of Powerminers which begins with drops falling from a cave walls. Slow synthesized waves sunk into violined stratas are rocking there, waiting for these sequences with a soft chaotic and repetitive pace which team up to fine percussions while the exhilarating minimalist rhythm of Powerminers flows under a thick cloud of cosmic tones and soft flutes which sing under pleasant orchestral arrangements. Very musical, Powerminers ends its lyrical journey in the jingles of an intra-ground station and its trains which fit into each other, a little as in the universe of

and his Magnetic Fields.
These tones of trains continue beyond Vision Part II whose rhythm is drummed by sequences to arrhythmic pulsations which spawn in the shade of discreet reverberations. Clouds of mist cover this rhythm which accelerates subtly its pace, while cymbals and percussions are framing a soft semi frenzied ascent which binds itself in percussions to tones of anvils wrapped in wadding to burst in a heavy and boosted ambiance. A very electronic ambiance filled by fragrances of

with furious synth solos. The intro of Vision Part III reminds me a lot of the essays of

on his very beautiful Atmospheres (1980). The mood is as well poetic as cosmic with its clouds of spatial dusts which enfold the warm winds of lyrical synths. This is superb vintage years cosmic Berlin School we are hearing here with all this panoply of analog electronic tones which become entangled in a perfect atmospheric symbiosis. We feel a life inside these organic instabilities which implode of an oniric slowness, waiting for the smallest space of freedom to explode of a progressive rhythm. And the opening occurs a little before the 5th minute with sequences which alternate in a perfect symmetry, drawing a rhythm limping on cyclic and crisscrossed chords which waddle by following the movement of a more harmonious synth line. This hypnotic rhythm set by carillons and reverberations hangs on to wonderful solos which enlace and coil on a minimalist tangent a bit evolutive.
I adored

Visions. It's a splendid return in time when vintage Berlin School had this capacity to seduce with its soft minimalist sequences which fed long hypnotic movements where the modifications in structures were as perceptible as a blinking of lash. Evolutive rhythms which were of use as assizes to long and languishing synth solos or musical canvas to atmospheric sound paintings where the imagination rocked our dreams and transcends our fantasies. It's very beautiful and too short! And this gives me the taste to go off to explore the world of

If Im not mistaken, Visions is the very first factory-pressed cd by Polish composer

. This cosmic album pairs the classic sound of Germany's vintage EM-years with nowadays modern technology, all assembled into four long compositions.
Next to most enjoyable spatial sequencing following in the footsteps of

knows the right tricks by presenting s a nice range of spacious pads and solo voices along catchy effects and environmental sonic sketches. The latter neatly expands the sonic experience brought to you on the second piece Powerminers.
The first part of the title track roams in moody atmospherics, while the second part is much more up-tempo and smoothly moving along with a joyous solo. I personally imagine though the title tracks third part will be the favourite amongst fans of melodic EM. This 13-minute composition perfectly compliments the general melodic output of German E-bands and musicians weve accustomed to in the last decade or so.
Despite sounding far from original, I'm most confident the 45-minute Visions will easily find its way to the main EM fan base.

Now, this really IS a nice "Berlin School" style release! Featuring four long tracks, all filled with the classic elements of the genre - lush, flowing space & string synth textures and soaring melodies, all set over sequenced rhythmic bases that really do groove!

, and if this debut release is anything to go by, we have found ourselves a really excellent new musician playing in the "Berlin School" style.
Visions - 1 starts out in a dark, atmospheric territory and after a couple of minutes a sequenced rhythm flows in on soft waves of cosmic synths, then a Mellotron flute sound follows down the path with a heavenly melodic lead and flows oh so effortlessly through the remainder of the track, building extra layers and textures as it goes, before finally closing to the sounds of effects and metallic synthesizers.
Powerminers fades in with cavernous keyboards and

-like phased, swooshing space synths that sway gracefully from side to side of the stereo image, until a central metallic sequencer rolls in from centre stage, closely followed by more wispy and extremely tuneful Mellotron flute sounds which take the lead until the final two minutes where the music fades to reveal the clacking sounds of what sounds like a slowly moving goods train. This effect transports us towards Visions - Part 2 where a deep threatening synth texture lies behind the sounds of the slowly moving train as it gradually clunks off into the distance. A fast beating sequencer riff rises from the horizon and gets into a real flowing groove, and at just over two minutes in, phased swirling synths provide a beautifully controlled backdrop for the rhythms to accelerate over. More cavernous synth effects appear at various points and the lead space/string synths get into a really gorgeous cosmic groove with distant Mellotron flutes hidden deep in the mix. Just before the halfway mark a fantastic lead synthesizer emerges with a magnificent improvised melody line that just moves everything up a few levels on the excitement scale as it rolls high and low over the soundstage. Everything starts to decelerate for the final two minutes, where a distant Mellotron choir envelops you into a heavenly cumulous cloud of cosmic magnificence. An early seventies

-like organ sound surrounded by a host of sweeping space synths opens Visions 3 to magnificent effect. After meandering in space for four sumptuous minutes a sequencer rhythm that seems to have derived from an electric piano sound comes in to great effect to join the swathes of cosmic sounds and at just after the six minute mark up jumps an anthemic lead synth line that again lifts the whole track up into the heavens on a flight of real melodic worth. With some magnificent key changes adding to the thrilling nature of the passage, Maciej improvises the melody line and brings the track towards a climax, where another quick key change prompts the start of the climb down to just the sounds of the driving sequencer force and phased synth textures that take the track towards it's natural conclusion.
Overall, a magnificent, top-notch "Berlin School" album that is as good as any I have heard in the genre for some time. Incorporating flowing grooves with fantastic atmospherics, with just the right amount of melodic leads and key changes, this album will keep you rooted to the trip from start to finish.