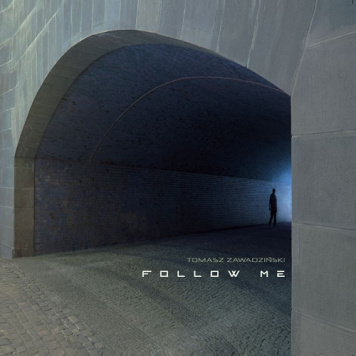 After a stunning 1'st album where

explored a musical universe very near the roots of a Berlin School,

style and even a little of cosmic rock, the Polish synthesist offers in Follow Me an album immensely more personal. A 2nd album released in 2004 and which demonstrates the fickleness of

to create atmospheres rich in heterogeneous tones where the listener can imagine an interesting virtual world, abundantly illustrated by a sound wealth which seems without borders. With Follow Me

does not waste time returning on the paths of his 1'st album. Towards the 5 tracks that compose his 2nd opus, he weaves synthesized labyrinths which exceed the borders of the imagination, being always inspired by the Berlin School style but the one we call the second wave which brought interesting names as

.
If You Feel opens with an intro of soft floating strata soothed by chirping and hooting of a pleiad of birds to phantasmagorical singings such as oviparous sirens. An intro to ambient atmospheres, such as structured on each of Follow Me 5 titles, that evolves slowly. A little as if we were in a black cosmos where we could see stars moving with a morphic passivity with slow sinuous movements which shape a timeless waltz that dance with a dreamlike delicacy. Sequences come to graft to this cosmic waltz, molding a soft rhythm of which ascending pulsations form a strange rhythmic waterfall to hybrid forms assaulted by a divine synth which blows its celestial harmonies. Of which this splendid refrain that magnetizes the ear and spawns among a keyboard with keys as limpid as nervous and these warm synthesized strata which already bitten our soul since If You Feel intro. A superb track which still bewitches me and for which I always try to listen again, quite as the very beautiful If You Need which opens with beautiful strata of floating waltzes, as the poetic universe of

on Electronic Universe. A soft pulsating sequence, more sober this time, shapes a warmly suave rhythm. A pace that flows in the shade of a very beautiful synth filled of enveloping layers and melodious lines. If You Want starts with an unusual rain of heteroclite tones, little as drops of wooden rains which bounce on a tight drum skin. A synth pierces this strange shower and spreads a hedging pad, while another layer with trumpet tone is slipping through shaping an ambient dreamlike texture. A sequential movement appears and subdivides the pace with striking of cupping style which team up to beautiful chords from a limpid keyboard, moulding a rhythmic universe as chaotic as unexpected under a serene musical approach among a synth to delicate approaches and fine solos of which discretions are get lost in a galactic foggy. A beautiful title of an incredible delicacy for a rhythmic structure so unusual.
This sequential approach to assorted tones and oversize cadences is the cornerstone of Follow Me. If You Can begins with synthesized layers which run slowly on the dunes of a galactic beach. An exotic sound landscape ornamented with strata of an idle synth and with the singings of fanciful birds. A slow atmospheric intro where crystalline chords toll the knell to a sequential opening filled by heterogeneous tone, as teeth comb that we rub on a manual saw. Chaotic and undisciplined, these sequences skip in every direction beneath the layers of a soft mellotron synth, shaping a strange melody in the harmonious paradox that we can also hear on If You Miss finale which, after a soft morphic departure, waves on sequences which skip in a harmonious indiscipline and subdivides a rhythmic wrapped of a soft synth to wrapping strata.
A superb album, Follow Me is clearly more different than Sounds Like Pictures. Although always avant-gardism and surprising,

presents a more poetic album and closer to contemporary sonorities, giving an album rich in sound textures and melodious approaches. Being a big fan of a sound wealth that the digital sound world established with the ingenuity of

of Innovative Communication, Follow Me can only subject me. And with titles as powerful as If You Feel and If You Miss, which entangle with other tracks as exotic as melodious, we can't let such an album passed by. I liked it a lot and I h2ly recommend it, especially if the period of IC and

first solo album (Wuivend Riet) charmed you, because we find this magic of sounds there which few dare to exploit, even if we speak about EM here!

The Polish Generator.pl label must have a lot of faith in music of

as Follow Me is the musician's second release this year. On the other hand, the moody and well produced music of this guy is made up of nicely layered textural, highly cinematic soundscapes and rich elements of the Berliner School style, featuring occasional melancholic undercurrents in the freeform passages. Especially the nice cascading sequencing patterns at the core of

sonic adventures make his engaging music sparkle. Warm, sustained soundpads and lots of atmospheric depth do the rest on the five long pieces, breathing both nostalgic as modern vibes. Of all pieces, the slowly evolving 18-minute opening track If You Feel is my favourite.
Mr

sure is a talent of sound-paintings, so make sure you don't miss out on his music.

Follow Me - certainly towards magical electronic lands, spooky tonal jungles, which remind us so much of those painted by the masters of Berlin School or their talented descendants. Already the very first track on the album signifies a very nice surprise for devoted fans of Early-Virgin-Years

: The awakening of a yellowish exotic forest at dawn has exactly that murky vibe we remember from TD's Zeit and Atem! This mélange of fascinating abstract soundscapes then makes room for a soothing electronic impression, perhaps a bit melancholic, but still underlined with optimistic notes. The second piece emerges from an interesting passage of some mysterious crisps and chirps, and leads to places which have very much in common with those so ingeniously "described" by

especially on his Fax-Recordings: there it is, a soft "rainy" tune, jazzy swinging between tonal systems, and "vibraphone" dreamy sounds as if taken from a film soundtrack. Track three, probably the best one on the record, consists mostly of numb and milky synthesizer lights, reflecting and sliding on some deep black electronic pond, dreamt about in a minor scale - one could compare the atmosphere of this piece with moods conjured up by

on the Body Love and Mirage albums! Track four gives the Listener a handful of sounds and arrangements both rooted in the Berlin Scene sound and eclectic, future-oriented, as if taken from a random

album. The final track is probably the most "traditional" one here - I mean obviously the Berlin School tradition - but still all the recognizable influences were filtered through the innovative imagination of the artist. Let us give this record a careful listen and we will really appreciate the already well-formed style of Tomasz Zawadzinski, who is able to paint musical scenes  sounds like pictures  both nostalgic and optimistic, both snowy and warm. The Listener will discover, that She is asked to follow