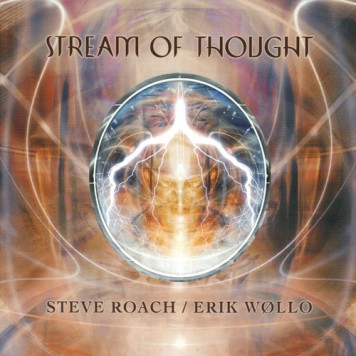 This is one of those releases that comes along every now and then where all the elements merge in alignment and a kind of magical sonic-musical alchemy occurs, taking the listening experience to a whole other level -- the kind of experience where when it's over, you immediately want to hit Play again. With these veteran electronic composers' combined experience of 60 years, the resulting STREAM OF THOUGHT experience can be described quite simply as mind-altering and soul-quenching. This release stands apart from the extended immersive long-form tracks of recent releases. Presented as a continuous flow, the metaphor of sitting on stream's edge while fully engaged with the present moment is the appropriate context to experience the fluid ebb and mercurial flow of this streaming living soundworld. Starting on two continents and two very different atmospheric conditions -- Erik in Norway and Steve in Arizona -- the foundation of their similar ages, musical inspirations, sonic inclinations, and a mutual respect for each other's work started the collaboration in early 2007. The most formative aspect of the collaboration occurred this summer with Erik's visit to the Timeroom in Arizona for final recording, arrangements and editing. The approach to the final structure was more in alignment with that of film editing, where the sense of time and pacing was consciously aimed at activating a powerful visual-auditory reaction and visceral experience. This is an inspired release in the best true sense of the word. Relax and float downstream as tranquil drifts, passionate rapids, midnight star gazing and blazing sunsets await on this ride by two masters of the genre.

Craig Padilla
Below the Mountain
64,22 PLN

We ship to 1 days
Delivery of the registered letter is available from 6 EUR.
Shipment provide post office.