A World Behind the Silence 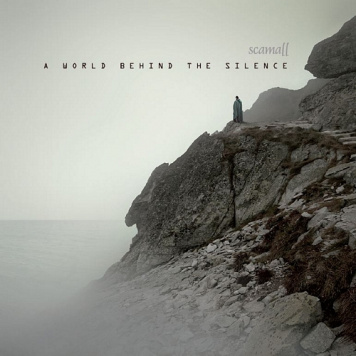 A World Behind the Silence is another sound adventure coming from Poland. After Brunette Models the Generator.pl label introduces another artist, Scamall, with a rather particular vision of EM. Contrast and paradox of a world however melancholic, but highly abstract, A World behind the Silence is a true exploration of a world which does not have anything silencer. A complex sound universe where Scamall amalgamates with wonder pummeling metallic alloy and heteroclite sonorities moulded by sound samplings to an ambient music with a tender trickle melancholy.
Offline begins this sound adventure with static noises absorptive by a metalized entity which intermingles on a linear movement, without really drawing a coherent musical structure. An intro presenting an album that mixes jagged and eroded sonorities by narrow scratched passages, a little as if we were cut from the universe by wave interferences, with long and slow ambient and sinuous passages poured in industrialized spheres. Anti-music or abstract art? Jakub Kmiec gets inspired by forsaken and afflicting places of Sweden and Ireland to create this sound homily for silence. But a silence constantly fractured of caustic sounds which gently pour towards tender passages where melancholy makes a hole in this opaque wall of triturated sounds. As on Warts and All where a beautiful meditative line encircles an intro as noisy as Offline. Linear, the movement resembles cardiac pulsations on a hatched line where deformed noises and incongruous sonorities sprinkle this sound horizon escapes from which fine piano notes. It's difficult to describe A World behind the Silence. The album is constantly torn between a strange synergy of metallic squealing and crackling which shorts-circuit strange melancholic softnesses as on Screaming Trees and the spectral procession of Wrapped. Vanishing Haze is a slow meditative track crossed by innumerable breaths of a metal coldness, where fine musical bits force in order to weave a melodious tapestry. Idem for Bright which is on the other hand more cordial, whereas Before the Silence Falls brings us in a surrealist paranoiac universe where the soft madness occults fine softnesses of an overwhelming human sadness on short breaks liven up by a hesitant tempo.
In World behind the Silence is a curious exercise in styles. Scamall visits abstract territories which will make the delights of Tetsu Inoue fans and certain titles of the FAX catalogue. As for me, it is not really my cup of tea. I quite liked this mixture of noises crushed and shredded by jaws with barbed wires teeth on long ambient and morphic music. But sometimes just of the music, without noises, would have been superbly delicious. For sound adventurers.


Scamall is a project of Jakub Kmiec, who found the main inspiration for this album in desolated places in Sweden and Ireland. A World behind the Silence is a 49-minute work of adventurous music that "consists of soundscapes incorporating abandoned and originally useless noises". Neurotic break beats, harsh bleeps, clicks and noises take off on the first track, fortunately soon ending up in ghostly atmospheres and textures with creepy effects. The soundscapes meander forth in the far more pleasant Warts and All, although rough edges and effects keep being scattered through the sound spectrum. Screaming Trees is another abstract, dark and drifting ambient excursion with light rhythmic elements, creating an otherworldly sonic environment. Wrapped is next with crunchy murmurs and more harsh and creepy effects over flowing soundscapes, which is harder to endure. Vanishing Haze continues in the tradition of Eno's Ambient 4 with sustained piano phrases hovering over mysterious textural plains. Morphing ambient layers, radio snippets and deformed nature sounds make up the interesting and overall cinematic Bright. The ghostly flavours of Before the Silence falls end the cd in the drony, organic and experimental style quite similar to the music of Tetsu Inoue.
The previous description makes it clear this not an easy-going work of atmospheric music, but one demanding an attentive pair of adventurous ears.
All in all, this well-produced cd of murky, grainy, strongly organic flavoured ambient-music makes up a challenge for any experienced ambient music fan.


In the beginning, there appear some harsh, neurotic breakbeats as if it were a Warp Records production (compare Aphex Twin's vinyl EP's). Offline is nonetheless not a typical Scamall track, rather a mere introduction to a mysterious, slow-motion, virtually beatless record. Scamall's music just cannot be easily classified; broadly speaking, it's murky, grainy, ferric-crunchy ambient-music, but there is more to style diversity than this. Warts and all has a specific neurotic unquietness in the sequential layer and features some sombre rainscapes in the numb background. Screaming Trees is an abstract miniature, where there are some experimental noise patterns scattered all around, but which, as a whole, also speaks ambient language (these dreamy, autoreplicating samples and bits, floating on black waters...). Wrapped and Vanishing Haze are dark-ambient jewels worthy of being put on dome of Brian Eno CDs. The final pieces made me exclaim, Pete Namlook would be glad to have an opportunity to release this stuff on his Fax Label! - Bright is an ingenious textural melange of ambient layers and deformed nature sounds, a bit like some of Biosphere youngest pieces, whereas the albums conclusion sounds a bit like Tetsu Inoue organic stuff, it is exactly that mysterious, dreamy, drony and monochrome. One could associate this album with works by Boddy & Carter, Jochem Paap or the beatless Steve Stoll, but these are just direction-markers, Scamall's music remains now and then very individual and original. Beyond any doubt, this CD is a tough one for "traditional" electronica lovers, well, even devoted ambient-fans could find this album quite a challenge. Still, the most important fact about A World... is, that Scamall catches our attention immediately in the beginning and keeps us in tension until the very last second. Scamall was definitely able here to build his own fascinating world, and this he did do with just a little help from such familiar sound structures, one could say... When it works, it means that he's not "just another keyboard player", he's an artist. Strongly recommended.

Bernd Kistenmacher
Beyond the Deep
70,82 PLN