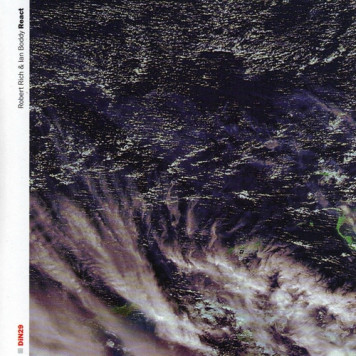 React is the third collaboration between American ambient pioneer Robert Rich and DiN label boss Ian Boddy. However, unlike their previous two studio outings on the DiN label, Outpost (2001) and Lithosphere (2005), this is a record of their first ever live performance at the Star's End Radio Show 30th Anniversary Celebration Concert in Philadelphia in June 2007.
The duo forge a fascinating sonic collaboration that allows for glimpses of each other's musical personalities to be seen within the evolving musical landscape. Boddy is mainly responsible for the rhythmic content which he mutates and morphs from the sonic input of Rich's MOTM modular system. There are references to a couple of tracks from Outpost (Ice Fields and The Edge of Nowhere) and the title track of Lithosphere but they're presented in a more energised and dynamic version. Meanwhile Rich paints a tapestry of sound with muted keyboards, flutes and his trademark gliss lap steel guitar voicing.
The music ebbs and flows from abstract soundscapes through gentle reveries to up tempo sections that combine thunderous analogue bass and glitchy percussion overlain with a mesmerising mix of keyboards, flutes and gliss guitar. A truly unique concert performance by two of the most accomplished musicians in modern ambient electronica.

Syndromeda
In Touch With Stars
71,49 PLN