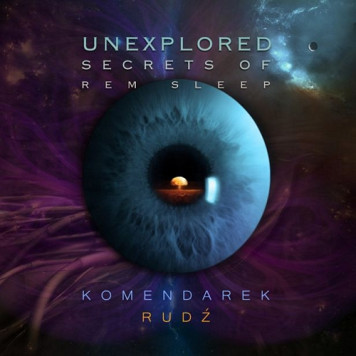 Standing on the Shoulders of Giants open the doors of dullness with a soft morphic melody prisoner of a vacillating movement of which the contractions slip in a universe of eclectic and electronic tones. Piano notes emerge from this cerebral oblivion, strumming a linear rhythm which is surrounded streaks and solos of a synth which switches around its delicacy for the loudness and bites of a howling guitar. The first steps towards the unexplored secrets of the dreams continue with the title-track and its long intro populated by a collage of musical samplings as much heterogeneous as dreams can weave unsuited landscapes. A galloping sequential movement pierces this veil of indefinite tones, awakening a delicious wave which waddles innocently. After more than 6 minutes of the ghostly knocks or the vague steps, discordant beatings and panting, resounding church bells, moves of spectral waves and electric winds; Unexplored Secrets of REM Sleep gets out of its somnambulistic torpor with a deaf rhythm which amplifies its progression with beautiful élans of keyboards and fluttering synth stratas which caress a wild rhythmic ride fed by the fire of good percussions and boiling psychotronic keyboard keys. Reminiscences From Beyond Infinity is the heart of the sleep's anguishes. It's a long epic title of 24 minutes divided into 4 parts. Divided between its ambient, meditative, rhythmic and furious phases, Reminiscences From Beyond Infinity begins in the tears of Dominik Chmurski's solitary violin which lulls the morphic choirs of its intro (Atavistic Throwback) with superb tearful stratas. Stratas which cry in a world of apocalyptic metal. The tone is lugubrious and we are absorbed by a world of coldness with knocks of horrible cymbals which crumble the hearing and by the movements of rolling drums which make roar the moon while slowly we slide towards Playing Dice with God. This 2nd part of Reminiscences From Beyond Infinity is filled by rhythms of electronic rock a'la Tangerine Dream era 220 Volts, guitars less although the impression to hear riffs in there remains vague. The percussions are wild and unbridled. They are supported by stormy sequences of which the crisscrossed exchanges get lost in the knocks of drum while synth solos are powerful and cover this lively rhythm of a strange mood of free-jazz. This rhythm dissolves at about the 11th minute, embracing a more lunar phase. It's a beautiful moment of thoughtful poetry where the synth whistles a delicate lullaby on the back of fine waves to frail undulations. An isolated sequence flutters its rhythmic elytrons, such as a cadenced threat, awakening a vocoder which mumbles the psalms of a schizophrenic misled on the top of a crowned mountain contemplating a world in gestation. It's in this long delirium filled of quirky tones that the last phase of Reminiscences From Beyond Infinity sets in motion. We hear tom-toms resound and the confuse ambiances. Tinkled keys cut the debate between the abstract and the concrete, reviving these synths perfumed by Tangerine Dream reminiscences of, introducing again a curt and nervous rhythm. A circular rhythm sat over unbridled percussions and sequences which try to fit to this tempo while the synth solos are watering abundantly the rhythmic frenzy with superb audacious musical figures. What a way to end this track!
After this stormy raid in the bipolar rhythms, Lonely Spirits over the Post-Megalopolis Badland offers a long introduction of serenity. The ambience is very cosmic with h2ly ambient synth layers which float lazily among choirs which breathe the morphic quietness among dusts of stars and notes of a discreet guitar played by Jarek Figura . The rhythm is boiling slightly a little after the 8th minute. Gyratory, it bends itself on a fusion of pulsations and guitar riffs, being of use as ramparts for sumptuous synth solos which are supported by clouds of choruses. This rhythm is fading away, getting lost in somehow indecisive and a bit spasmodic guitar notes which try to resuscitate a rhythmic phase hidden in the Neuronium vapours of ethers. Interrupted Stream of Consciousness ends this fascinating essay of the lifelessness universe and its phantasmagorical meanders with fine palpitations which drill an indefinable hubbub and its colourful tones. As everywhere in Unexplored Secrets of REM Sleep the progressive rhythm gets disguise in a sound fauna to thousand hallucinating brightness. The bass of Maciek Warda molds a groovy tempo which hems under the plaintive spectres of a progressive rhythm and strata of an organ in the old tones of the Exodus years. And Interrupted Stream of Consciousness explodes of a cosmico-rock-psycho-progressive rhythm with a funky bass, a speaking keyboard, hybrid synth layers and a guitar with furious loops which harmonize their priorities on good percussions, converging on an evolutionary tempo which will break dryly on the cliffs of the incomprehensibility, the dumb witness of the originality and the anarchy of the harmonious fluids which separate Unexplored Secrets of REM Sleep from the dream and its complexities at the evolutionary stage of the sleep, disrupted by such a provocative album.
You will have guessed that Unexplored Secrets of REM Sleep is not for all ears. It's a powerful album swarming with bipolar rhythms where the disproportionate imagination of Wladyslaw Komendarek finds his apotheosis in an impressive pattern of sound effects. The music is beautiful. Puzzling, it's split by evolutionary directions which suit h2ly well the conception that we can have of the evolutionary phases of the sleep. In brief, Unexplored Secrets of REM Sleep carries marvellously the boldness of its title and its project. It's an album that we taste at the tips of our ears and once we have both ears filled by, we just can't give up it!

One doesn't have to introduce either the el-hero Wladyslaw Komendarek or the Generator.pl "label"-artist Przemyslaw Rudz to the fans of sophisticated electronic music. This time we can admire a conjoint of both musicians. Already the title of the work itself announces something very special indeed - well, let's see, what unexplored secrets does the REM phase of sleep hide...
The first track is built in a warm, folded style, which reminds me of Tangerine Dream's Flashpoint; one can really enjoy the majestic piano chords and a typically Froesean guitar in the second part of this piece. In our dream we become watchers of scattered bluesand castles, which disappear slowly and turn ivylike into a concrete wave shimmering with darkened colours.
Our second dream consists of dismantled waiting for crispy snow, while we are hiding in the shade of a huge metal ice-core-container. The ground is too slippery, we shouldn't take a walk, let's wait for the weather to make its mind - but what is happening on the other side? The whole plain is being searched through by some faint limelights of rusty cranes, which stroll about like hunchbacked mechanical giraffes. The music could be defined as explicit electronic rock, but the first minutes of this track sound as if they were taken from some dusty electronic trail recorded by Alex Smoke or Peter Benisch.
In the third track we will get to know, whether nightshift bulldozers can play the drums; behind their backs we can see the wonders of photosynthesis happening here and now.

Komendarek and Rudz drift towards daring experimental electro-jazz - they let some new sunlight through the windows of Vangelis' Albedo 0.39 in. The fourth dream means slowing down and falling into deep fog. We must hurry up and buy a package of ambient staples before the sequential spiral comes out of its hiding place, somewhere between the solarized beach and abandoned lairs of sea-snakes. The Listener gets lost in the labyrinth of notions, what do all these chalk signs mean. Brilliantly surrealistic 17 minutes.

The final track can be interpreted as an homage to rock-oriented Tangerine Dream - it's pretty cool stuff, full of surprising chord-dives into halftones, spicy rhythm line and fairly aggressive guitar tunes. It's hard to tell whether we are observing airports in turmoil or neural interactions, pictures change even faster, when we try to pay attention to their shapes they just disappear like heaps of foam when touched with a piece of soap.
What we're dealing with here is a very explicit content, a daring odyssey full of daring associations. highly recommended.

Przemyslaw Rudz quickly became one of CDS Towers best selling indie synth artists over 2011 with a collection of no less than four albums released over the space of a couple of years, and early in 2012 we have a 5th, which this time is a collaboration with somewhat longer standing Polish synth musician Wladyslaw Gudonis Komendarek . The synth duo also recruited some extra assistance from Jarek Figura (electric guitar on tracks 4 & 5), Dominik Chmurski (electric violin on track 3) and Maciek Warda (bass guitar on track 5).

Anyone who invested in the previous four Przemyslaw Rudz albums will like this too. Again, it is an album that breaks some new ground and perfect music to take you out into the many different worlds the mind's eye can offer. Apart from sounding a little like

Klaus Schulze and Tangerine Dream from time to time, there certainly is nothing overtly familiar that will immediately make you think of other big-name 'EM" musicians. It is very much an album of "original" creations that provide many thrills and spills along the way.

Many of the classic sounds that sprung up in the earlier Rudz albums are still well focussed on for this collaborative effort, especially the big space choral sounds that featured on the most recent of his releases. The overall sound is still very much rooted in the classic 70's, with all the added benefits of noughties production techniques, and the end result is an excellent blending of atmospherics, melody and sequencer/rhythmic qualities, with some really classy sound layering and inventive improvisations going on throughout.

Craig Padilla
Below the Mountain
62,40 PLN