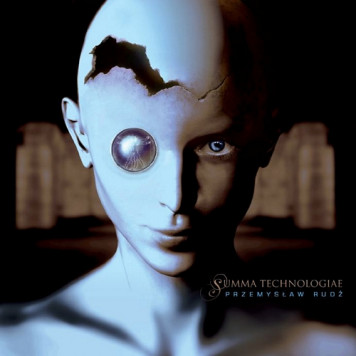 What strikes the most when we are listening

as well as beautiful artworks which decorate the eye while the music cares about ears. Another nice discovery from the Polish label, Generator.pl.

is a Polish synthsist h2ly inspired by the French School style (

), but with an even more progressive approach and, by moments, a more rock one. This gives a multi-dimensional album, where soft melodies travel through a strange sound fauna tinted by heterogeneous tones. In fact, Przemyslaw's first opus

is a beautiful sound adventure where the cosmos is the front door of a fascinating musical world.
Dilemmas begins by a rather eclectic intro. Varied tones compose a sound fauna of the most eclectic where everything is forming and hearing through strange felted pulsations, threadlike reverberating serpentines, hoops and chinking which are colliding and floating in a cold cosmic atmosphere, while a sequence with curt and hatched chords pound an odd rhythm which zigzags beneath this thick cloud of colorful tones. In spite of this staggering sequential frenzy, Dilemmas is in static mode and boils up in a dark cosmos where a linear sequence hiccups beneath a sky streaked by brief synth solos, crystalline arpeggios, intriguing dark breaths and crystal clear keyboard keys which sculpture momentary harmonies. A musical world of contradiction which embraces a new tangent in the 8'th minute whilst another sequential line, a bit lower while being also heavier, give a second breath to the static broth that is Dilemmas. A sequential line with chords which caw and which is held by sober hits of percussions and keyboard keys while a discreet mellotron synth amplifies this rise of cosmic adrenalin around sound prisms which sparkle and wave in loops. And quietly, Dilemmas fades in time with a soft mellotron mist which turns off the last breaths of a rich and diversified analog life. Two Evolutions is what compares the most with the musical universe of French School EM. An ascending and threatening sequence a'la

evolves in it beneath strange electronic vocalizes which remind Clara Mondshine's schizophrenia. Two parallel musical universes which are harmonizing beneath the somber layers of a synth with superb swaying and cosmic waves of which harmonies sparkle artlessly before the rhythm explodes with good percussions, throwing Two Evolutions towards a more rock tendency.
The edgy and steady rhythm of Two Evolutions is constantly illuminated with beautiful synth passages which recall strangely

musical world while the rhythmic flickers under the fragrances of

, in particular with the crystalline chords which hammer and are subdividing to stir nervously at the end of the road. This is a very good Revival French School EM that ends in a foggy mellotron, introducing the ambient and floating world of

. Heavy sequences bubble nervously on Intellectronics, propelling us in an aggressive world of sequenced turbulence where sequences pulse, are intersecting into wavy cascades and flicker fervently around synth striations which glance through and scatter with crash and acuteness on a title as boiling as motionless.
After this enormous sounds storm, Prolegomena To Omnipotence brings us in a shelter under cover with a soft and oniric track where eclectic tones glance through this soft electronic procession. Haughtiness, Phantomology is the cornerstone of Summa Technologiae. A soft intro, very celestial in fact, charms our ears with a synth filled of layers that waltz and are entwining languishingly in a warm cosmos. Fine arpeggios sparkle at around the 4th minute, making resounds their echoes in a quixotic cave crossed by heavy dark winds while a first sequential movement livens up the serenity of Phantomology. A sequential line which staggers to bind itself to slightly metallic percussions which drum delicately under heavy spectral winds. Towards the 8th minute Phantomology rhythm is well settled around sequences which wave in loops, nervous percussions and a synth with a kind of talk box. A nervous and fragile rhythmic that heavy synth solos is wrapping, freeing in their attacks some shrill streaks which wind in a multicolored electronic universe of a rhythmic as complex as unusual. It's a good track that shows all the complexity surrounding the suave and frenzied rhythms of Summa Technologiae. Determinedly more rock, Creation of the Worlds begins with a dramatic intro where the synth waves and winds in a sphere of resonance. The rhythm becomes heavier and faster with weighty sequences which hem with robust percussions while the synth is waving there while fleeing laments wrapped with a beautiful mellotron fog. With firmness, Creation of the Worlds goes astray towards the more crystal clear sequences of Pasquinade On Evolution which collide delicately in the shade of a synth of which delicate solos perfume a synth aura where strange rustles of pastels are getting lost in the mists of a cosmic mellotron, concluding a first opus of

which lets glimpse an artist with a very convincing potential.

is a Polish musician living in Gdansk, who's Summa Technologiae is a musical interpretation of

book translated into a language of synthetic and mysterious sounds. After a deep atmospheric intro, Dilemmas kicks off with complex, clear sequencer patterns. They don't evolve any further though, staying too repetive too my liking. The fade-out of this piece also takes far too long. Two Evolutions sound far better to my ears with nice and moody old-school

soundworlds and sequencing, but this feel doesn't last long as Space Civilizations is next. Here the superficial, free form soundscapes stay unattractive, later ending up in the hectic sequencing and busy, chaotic textures of Intellectronics.
After quiet, atmospheric sound painting on the fifth piece, the 17-minute Phantomology announces itself. Its the longest trip found here, but all the way also lacking interesting sonic content. Creation of the Worlds fortunately sounds more focussed, but a high solo sound makes it quickly annoying as well. The last piece can't make things up either.
All in all, the groovy style mixed with chill-out and synth-pop flavours of Summa Technologiae just doesn't do it for me, despite the fresh sound and mastering quality and the beautiful artwork that graces the cd.

The album begins with soft ambient washes, somewhat resembling the spacey moods conjured up by

throughout the Shades of Orion-series; soon, however, the music drifts in the direction of sequential patterns a la

, whose music was one of the most important sources of inspiration for

. In such a way, the introduction is a cross-over piece between chillout-lounge and rich textured sequential elpop. The next piece is an interesting combination of two different moods: There are, on the one hand, recurring,

-like, icy chord-waves, and ,on the other hand, nice rhythmic patterns a bit like good old (about 1985)

stuff. In the third piece there have remained only fat clouds of spinning chords, lively beats are there no more; hark, there it comes, endless serene Blue oozing out of the speakers... Still, quite soon a catchy ostinato in some low key lurks in, and the whole scene turns immediately into a haunting mood in the style of

Thief soundtrack... The main sequencer joins in and so we are ready to greet the fourth track, sheer ostinato-battlefield with pumping sequences and gloomy chords raining cats and dogs in the background... Indeed, we are not far away from amazing dynamics of

Horizon-suite (1984). Number five (so far my favourite one in the whole set) is an ingenuous conjoint of subtle ambient "nature sounds" and the grooviness of a programmed percussion-line, which is very upbeat but... with no single beat uttered, just mere whooshes of "electronic cymbals"! This fine arrangement makes it clear, that there is a whole lot of amassed energy, somehow never to be let out of the bag, though. This track reminds me of both parts of Xangadix by

; the Listener may take a walk across the rusty, sepia meadow, as if taken from some long forgotten photograph, and still so lively and sappy... be careful where you tread, watch this whole lot of cyberinsects fooling around amidst the wireblades of grass... The next piece consists of several contrasted parts; in the beginning, there resonate some ambient chords in a major key, then we have a nice foggy passage leading to a groovy, programmed coda, yet another fine combination of lounge music and solid elpop with a slight IDM touch to it. The seventh track brings some great sequencer-driven pads in fruity colours... This is a nice background for freefalling "fainting" sounds of the lead synth solo. This track merges with the final piece of the album, some of the previously introduced tunes get continued, but the whole track gets a bit quieter and, so to speak, a bit more spacey. The main attraction is a very fine solo tune (as if played on the legendary PPG Wave or yet more legendary Theremin), slyly balancing between sunny relax and minor (slightly chromatic) doubts... All in all, Summa Technologiae is a multi-coloured album, a good portion of fine electronic music, which sounds fresh, rich and crystal clear at the same time.