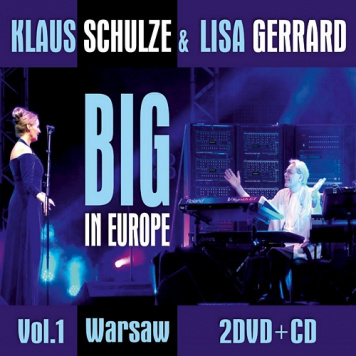 1983. The time of the starting process of change behind the "Iron curtain", the time of "Solidarność". Klaus Schulze is one of the few West-German musicians who is allowed to go on a celebrated tour in Poland. As a pure instrumental artist the system mistakes him for quite safe. But Klaus Schulze does not miss an occasion to show his solidarity with the protesting population. After the political change many of the former attendees of his concerts were in the Polish government now.
This government invited Klaus Schulze and asked him to play at the 70th anniversary of the Soviet Assault on Poland September on September 17, 2009 in Warsaw in the courtyard of the royal palace.
Together with Lisa Gerrard, acclaimed exceptional artist and singer of Dead Can Dance Klaus Schulze delivered an intensive performance in front of an impressing scenery. This concert in Warsaw is in the focus of Big in Europe Vol.1, the first of overall 3 releases, which will include the whole tour in Europe 2009, with performances in Berlin, Amsterdam, Brussels and Paris.
The second DVD contains, beside an at full length documentary, many encores during this tour.