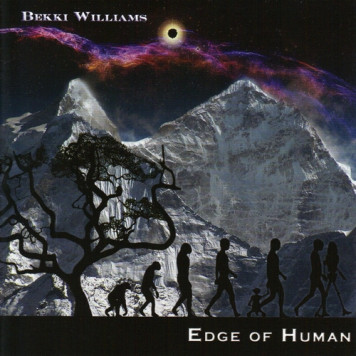 Yes, it's here at last! Edge of Human" (previously known as Monolith), is Bekki Williams fourth studio album and it's a powerful, melodic journey of electronic music that has gone through numerous incarnations since its intended release date way back in 2001. The music contained on Edge of Human is typically Bekki Williams, building on her style of supreme melody and uncluttered production, while concentrating as much on the synthetic as the symphonic, with a touch more of the dynamic, thereby adding even more creativity, warmth and depth to her emotive compositions. This album again sees Bekki, an accomplished flautist, playing flute on her compositions and also features guitar by Paul Barraclough.
Edge of Human is full of warm, rich melodies, lush orchestration, creative energy and intricate sequencing that also pulls together elements from her three previous albums to present a delight for fans of her music. It may have been a long time in the making, but we think you'll agree, Edge of Human is a triumphant release, rich in substance and style that confirms Bekki Williams stature as one of the leading composers of top quality, melodic instrumental music.

Hypnosphere
Within the Whirl
72,50 PLN